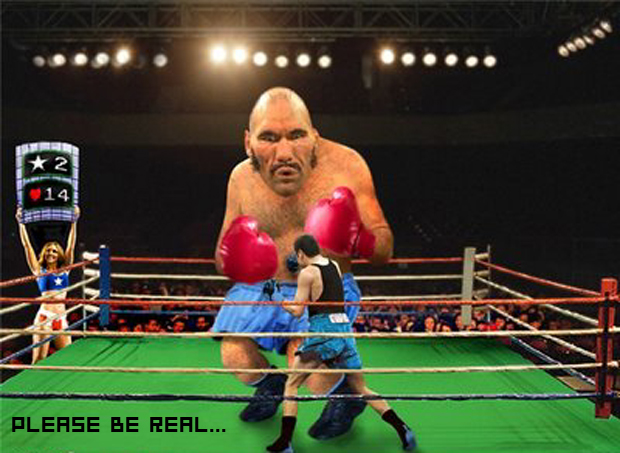 The first new Punch-Out!! game in almost fifteen years is about to be released, and I can’t wait to play it. There are reasons to be concerned that it may be a one-trick pony, but with so much mystery still surrounding the game, it’s also easy to imagine how it might still be amazing. Ignorance, as they say, is bliss.

Well, our bliss may be in jeopardy, as NintendoDpad.com has promised to give us new Punch-Out!! info every couple of days until the game’s release in mid-May. Recent highlights include the revelation of new triple star, super uppercut, the method to get yourself a brand new helmet, the achievements for the Glass Joe and Von Kaiser exhibition matches, and perhaps best of all, the tease of a new mode unlocked after beating the game.

Could this new mode see the return of green-mesh Mac? How about weird-back, anime-Mac? Personally, I’m hoping it’s a HD, yucky, realistic Punch-Out!! mode; the kind that the kid version of me always thought he’d be playing in 2009.

Hit the jump for the full list of new Punch-Out!! details, and while your at it, hit the comments and tell me what you’re hoping for in this new mode. Ear-biting mode? Vodka-Drunkenski mode?

– Completing a circuit changes Little Mac’s outfit (green, to blue, to ect…)
– Use all three stars at once for a triple star spinning uppercut
– Ring size/venue changes from circuit to circuit
– Little Mac wears a helmet in the training session (details discussed earlier)
– There will be specific challenges in Exhibition mode

Von Kaiser challenges:
– Win the fight and land EVERY punch thrown
– TKO Von Kaiser in under a minute
– KO Von Kaiser with only 5 punches

Glass Joe challenges:
– Knock him down three times, but let him win by decision
– Find the one-punch knockout
– Win a fight without dodging/blocking/ducking

– Camera zooms in as you beat up your opponent
– Pressing the minus button between rounds will regain health. This is allowed once per fight, you’ll see a visual confirmation of the button press when Doc Louis eats a chocolate bar
– Lose 100 times and earn the training helmet to make you invincible
– Tap 1 and 2 to regain health after being knocked down
– Depleted heart meter means you can’t punch
– Special mode unlocked after you beat the game (details are secret)