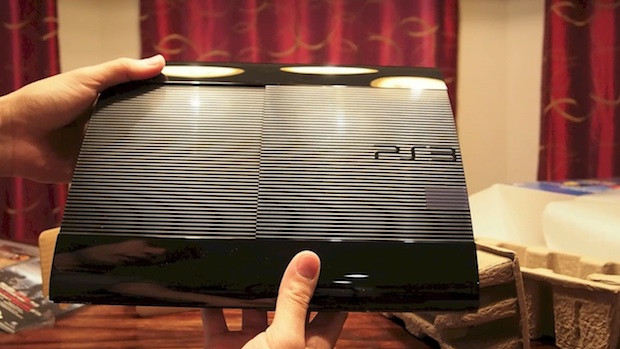 Here’s a good look at the new PS3 model that was announced at Tokyo Game Show a few weeks back. We’ve unboxed a fresh 250GB unit for you in the video above, and we have our full impressions of it below.

This slimmer-than-slim form makes even the previous model look a bit big, but when compared to the original launch unit it seems really dinky. Sony says it’s 25 percent smaller and 20 percent lighter than the current model, so it’s roughly half as big as the launch unit.

As for build quality, this thing is plastic throughout. It seems a bit thin in places, especially on its top, where the new sliding disc door is. That said, as long as you don’t accidentally kick it like a soccer ball or drop your Xbox 360 on its top, it seems durable enough to last.

It’s a bit ugly, though. Sony has a history of strange-looking game systems, and while not the worst in their line-up, this new model is nowhere near as attractive as the last two PS3 models. The ribbed, matte plastic on the top of the unit looks really old-fashioned, and its flattened oval-ish profile reminds me of something that would be used to clean hardwood floors.

Looks aside, this new model is a perfectly fine PS3. Through about 5 hours of play through both console and PSN titles it ran without issue. Bonus: it seems to run a bit quieter than previous models as far as fan noise goes.

Knowing how flaky the original units were in the WiFi department, I used this new model to download about 30GB of games. I had no issues, and as good of a speed as PSN could dish out.

While everything is the same as far as operations go, disc loading is a bit different. Sony did away with the slot-loading format of the last two, now using a sliding door that reveals a tray for Blu-ray loading. Discs lock onto the tray’s spindle, holding it in place. While the tray opens with a release button on the unit, closing this sliding door involves pushing it back to the right with your hand, manually. It reminds me of closing the upper body half of a coffin, which made me a bit sad every time I had to do it.

There’s a bit of disc seeking noise at start-up and after disc loading, which may alarm those used to older systems. The whirring of the disc may be a bit more apparent if you’re positioned closer to the unit, and the seeking noise would be very annoying if you were right up on it, but it’s not like this system is that much louder than previous units.

Given that the disc locks onto the spindle, the new PS3 model can be used in an upright position. But with how thin the unit is, you might want to invest in one of the optional stands.

This bundle comes with a Blu-ray of Uncharted 3: Drake’s Deception in a Game of the Year format, which adds a ton of bonus content on disc. It also comes with shooter Dust 514 and a voucher for $30 of bonus content. The rest: a power cord, standard A/V (composite) cables, a USB cable, and one black Dualshock 3 controller. I have no idea why Sony didn’t pack in an HDMI cable, though.

For me, this new PS3 came along at the right time. My original 60GB unit is still running, but I’m constantly out of hard disk space, and the wireless connectivity is really flaky. A fresh 250GB hard disc in a new slim unit fixes both problems.

Right now the bundle goes for $269, which seems fairly reasonable for the big hard disk and the included game content. Still, I can’t help but feel like this thing was redesigned to be sold at a lower price point. I’d bet that many consumers looking for an upgrade would rather have a new system with no pack-ins for a price of $199 or lower. With the holiday season right around the corner I’d bet we’ll see something along those lines soon.