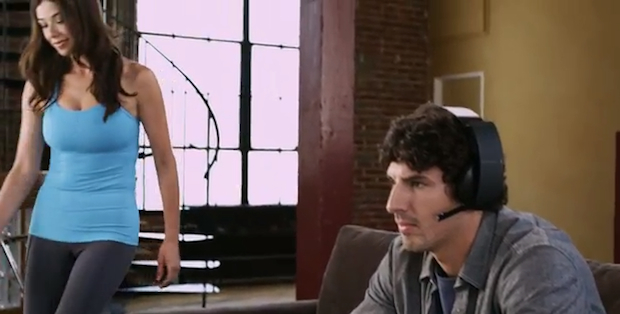 [Update: This headset ships on September 6. Amazon and other stores are taking preorders for the $100 set. Bummer. Sony’s site says the surround sound does not work with Blu-ray movies.]

The new PS3 Wireless headset sounds so good that it makes you able to totally ignore your super hot girlfriend. That 7.1 virtual surround sound broadcast via Bluetooth works like blinders, making you totally shrug off your girl’s flirty looks and obvious chest heaves. Thanks to the on-screen device notifications you’ll never have to look away from the screen to notice your girl’s skin-tight top and painted-on leggings either.

This Official PS3 Wireless Stereo Headset is so powerful and feature-packed that it can make your girlfriend totally disappear (0:56) even though she was just sitting there a second ago! So pull out that microphone, push up the on-board volume slider and play games with your bros without worry!

Witness the power of this headset in the video after the jump.