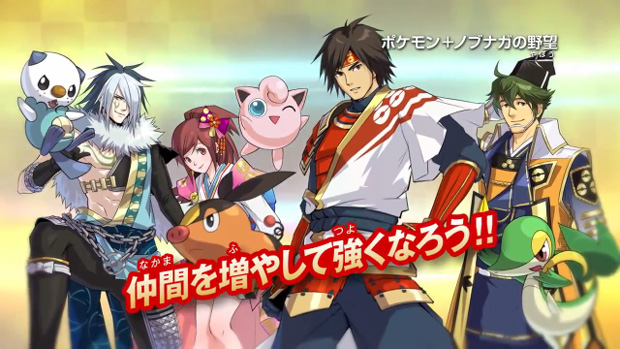 Today’s Pokémon + Nobunaga’s Ambition press event was capped off by a brand new trailer which demonstrates a little gameplay. It looks a lot like Disgaea or Tenchi Muyo! for the Super Famicom, my only prior experiences with the genre. Is that what I can expect? Moving my party members around an isometric map and triggering attacks that target specific squares on the board? I’m down with that.

I think it’s hilarious how mismatched some of the general-Pokémon combos are. A two-tone-haired, Japanese pretty boy badass wearing half a shirt and chains as a belt partnered up with a bitch-ass Oshawott? That’s funny stuff!

Also, those who buy the game get a special Pokémon TCG card. Is that still a thing? Wow!