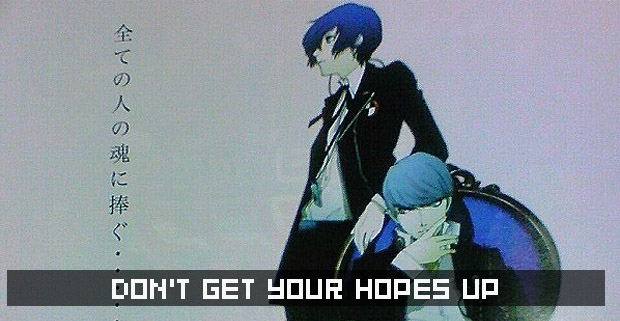 My inbox was teased with a link to a page that said that Famitsu hinted at a new Persona game with a mysterious image. Excited, I checked it out. The first thing that struck me was the image. I know these guys. It’s the protagonists from Persona 3 and Persona 4 as well as the one from Persona: Trinity Soul, an anime. There’s no way they’d be in a game together, right? Then I saw the text, which looks a lot like the name of a Persona song title. It was then that I remembered seeing this image last year.

Here’s the deal: this is an ad for a disc release of Persona Music Live, a concert that took place last year and featured Persona music and cast.

Sad? Not really. I want this disc. And like I said, I’m pretty sure there’s a new Persona game coming.