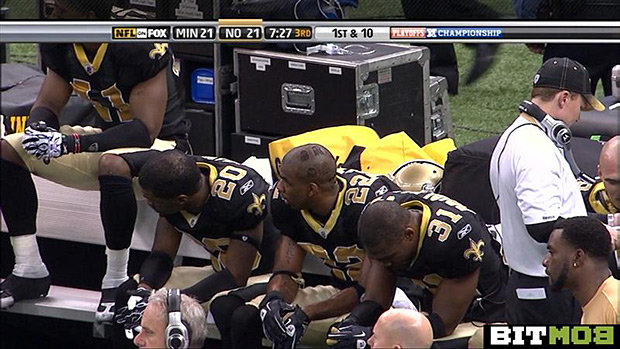 If you were one of the 57.9 million Americans who watched Sunday evening’s NFC Championship Game between the Minnesota Vikings and the New Orleans Saints, you might have caught the above shot of Saints cornerback Tracy Porter reppin’ Pac-Man. Bitmob grabbed a screen capture of what they called “quite possibly the greatest haircut in history” — in case you can’t tell what Porter has carved into his hair, you can check out a blown-up image in the gallery.

Yep, those are the four Pac-Man ghosts: Blinky, Pinky, Inky, and Clyde. I wonder if Porter’s barber is a gamer, or if Porter just handed him a picture of the ghosts and told him to start buzzing. Either way, the result may have given Porter an edge in the game: he picked off Vikings quarterback Brett Favre to stop a potential game-winning drive; that interception essentially sent the game into overtime, where the Saints won the game, and a berth in Super Bowl XLIV, with a field goal.

Have any of you ever tried out a videogame-themed ’do?