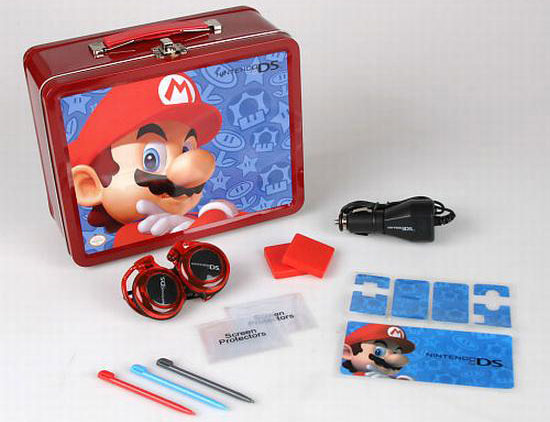 What’s better than playing Super Mario Bros.? How about storing your peanut butter and jelly sandwich inside Mario?

Nintendo has released a bunch of Nintendo DS and Nintendo Wii accessory kits that come packed in their very own lunch box. You can choose from a Mario, 2 different Princess Peach, Yoshi or Legend of Zelda: Phantom Hourglass design kits for the DS, and a Limited Edition Legend of Zelda: Twilight Princess kit design for the Wii. I’m pretty sure that there is another Mario design available, because I remember seeing two Mario designs at HMV, but I can’t seem to find a picture of it.

Each DS kit comes with three styluses, a set of head phones, two silicone game cases, a DS character skin, two screen protectors, a car charger and a metal lunch box. The Phantom Hourglass kit and one of the Princess Peach designs come with a bonus DS wrap around case, too. All of the items in each kit match the character design in images and colors. The Wii kit comes with two gray Wiimote gloves, two gray nunchuk gloves, a Zelda game case/wallet, and a metal Zelda lunch box.

If these lunch boxes aren’t good enough for you, then there is always the old school route!