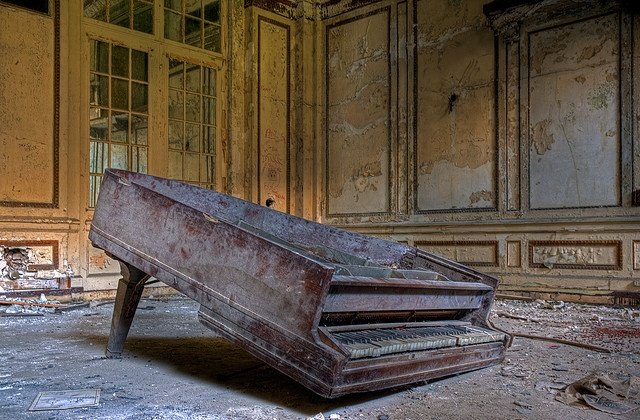 [Dtoid community blogger and the Chopin of my heart Alphadeus has produced a new album. It’s worth your time. Want to see your own stuff appear on the front page? Go write something! –Occams Electric Toothbrush]

Hello friends. I’d like to share with you my most recent album released today. It’s called FRACTURED.

FRACTURED is a concept album idea I’ve had for at least a year, possibly two. The idea was to write two different types of albums, one focused on emotion, the other on logic, and combine them. With my limited knowledge of keys and scales, I organized the songs as if they were keys on a piano, starting with C. The emotion songs are the white keys (7 songs), while the logic songs are the black keys (5 songs).

As always, the album is free to download. If you enjoy it, I highly recommend grabbing it for free. There’s no need to pay for it, or any of my music. I’d like to talk about the individual tracks. The first letter of each track spells out EMOTION AND LOGIC.

Enjoying the Moment – The intro track to this album, hopefully written in the key of C. The string progression is partly based on something I enjoy playing during piano journals. The emotions represented in this song are happiness, and determination (is that an emotion? :p).

LEARN – For the logic songs, I had a few rules in place. They had to be fast, with lots of notes, sequences, patterns, etc. 4 out of 5 of them are “chip music”, songs with chiptune instruments, but also other instruments. Other than the rules in place, the songs were meant to be fun jams.

Madness Contained – Although the song is called “Madness Contained”, it was not written with much anger. If I had to label the emotion, I’d say a bit of sadness with maybe a hint of anger, so I uh, guess the anger is being contained. Hmm.

OUTLINE – I enjoyed writing this song, because of the scale used, and how it transitions into 2 separate bridges. This is the only song in the logic series that uses synth instruments, while the others are mostly chiptune-style instruments. It is still heavy on speed, and has lots of notes.

Outstanding Resolve – I’m pretty terrible at describing emotions. If I had to label this song, I’d go with courageous, adventurous I do not know if those are emotions.

Through the Mirror – This is a very happy song. Happy, about to go on a journey through the mirror, into the unknown. I like to think of carefree when I hear this song.

GO – Chiptune style song. Very fast, with as many notes as I could cram in there!

In Too Deep –  This is kind of the reminiscing song. The looking back to the past, and feeling somewhat sad over the events that took place. At the same time, you can hear a bit of happiness, that things are going to get better. This is a common emotion with me.

IMPLEMENT – Another fast chiptune style song, as was the rules written for it to be fast!

Over the Hill – The “depressed” song, absolute sadness, bottom of the barrel, I feel worthless track. Another common emotion for me. I’ve been doing better lately, though.

CHECK – Did I mention there would be fast, sequential songs with mostly 8-bits used? :p

Nectar – The end of the album/journey. All is well, the main emotion is, of course, happiness. This song actually borrows a lot of elements from other songs on different albums. I like to reuse certain melodies and progressions if I feel they aren’t being heard, or I simply love hearing them. Transitions into heroism. The feeling of success.

It was going to be something a bit more “personal”, but unfortunately I am unable to add lyrics, and sing to my music. I can’t get the words out. One other thing about the logic portion of the album. The five songs are what I consider the 5 steps to solving a problem. 1 1) Learn what the problem involves. 2) Outline a plan to solve the problem. 3) Go to where you need to be to solve it. 4) Implement the solution. 5) Check it to make sure it’s the correct solution.

In other news, I have been doing pretty well, all things considered. I’m always poor (financially), but I’m not broke, basically just scraping by, which is fine. I’ve had excess money, and I’ve donated to special causes, helped my girlfriend and her family out, and took many friends out to nice dinners. I’m not looking for more money, although if for some reason you feel my music is worth buying, know that the money basically goes towards feeding me:p

I have a Patreon https://www.patreon.com/alphadeus if you wanted to support me without buying an album. The Patreon is per month, not per song or album, and they let you set a limit to how many months you’d want to support for. Really just throwing it out there because I have one. I hope everyone is doing well. Please, enjoy the music, grab any album you want for free ^^

One last thing, I don’t know if I mentioned it, but on my Bandcamp, I combined all of the volumes of Songs for Gamers, plus other exclusive songs (such as the April Fool’s album), and even some podcast themes, into one super album. Album art by RobertoPlankton, put together by Sir Davies 🙂 The album itself is 115 tracks, 6 hours worth of music. It’s a beast, and it was written for this community. The best community. My friends at Destructoid 🙂