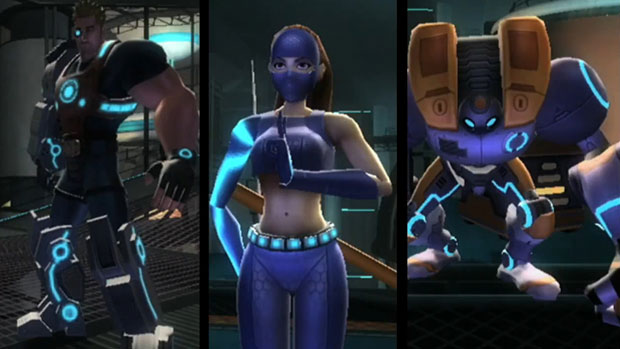 Capcom certainly wasn’t kidding when it said developer Bionic Games had re-worked its Wii-exclusive, Spyborgs. As this new trailer shows, things are… different.

The basic premised seems like it remains — a team of superheroes working together to stop a nefarious plot. You’ve got the ninja chick, Clandestine. You’ve got the rough-and-tumble robot, Bouncer. And then there’s Stinger, a firepower specialist who has a gun on his arm. It looks like a straight-up brawler, with big bosses, and cooperative finishing move attacks. Hard to argue with that, really.

Spyborgs definitely has a more “serious” look after this overhaul. Well, at least about as serious a look as a typical Saturday morning cartoon could get. When we saw the game last year, that’s the vision Bionic Games had, but weren’t quite hitting the mark. The original game looked like a mix between your typical Cartoon Network fare and late night Adult Swim content. In otherwords, all over the damned place.

The new Spyborgs definitely seems more focused, which hopefully will result in a better, tighter product. Also, we sure hope it’s fun. If you’re interested in just how much the game has changed, check out our original preview from CAPTIVATE 08. Oh, how so much can change in a year.