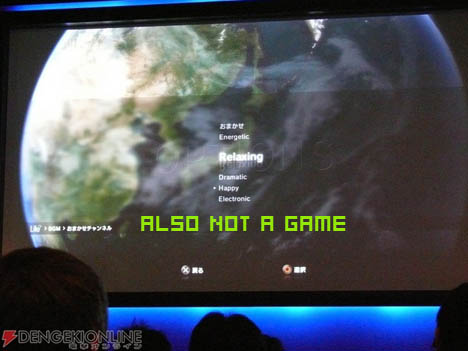 You know how the Nintendo Wii has its weather channel? Now the PlayStation 3 will have one. Great.

This new “Life With PlayStation” is an app that features a fancy 3D globe that can be explored to reveal weather and news, according to Gizmodo. Revealed at a recent press conference, Kaz Hirai says that this one comes with high-res imagery and global weather satellite images. You’re seeing weather, and not a forecast. Super. Now they can claim that no one does weather like PS3 does.

As far as news goes, even local news items will be displayed, which may point to the service being open to more than AP feeds.

For the primary version the application sticks to the present time but in the future we plan to build a system that can visually present stored photos and movies according to their recorded time and place, allowing users with their friends and family to enjoy the visuals in chronological order.

My take? It sounds confusing, and in the end I don’t really need another Weather Channel or CNN on my consoles. You all say it every day, and I’m with you: make more games, Sony.

Destructoid Contributor Jonathan Ross asked, “If you set it to dramatic does it tell you about all the people who are dying because of weather-related phenomena?”

I don’t know, but that would be pretty cool!