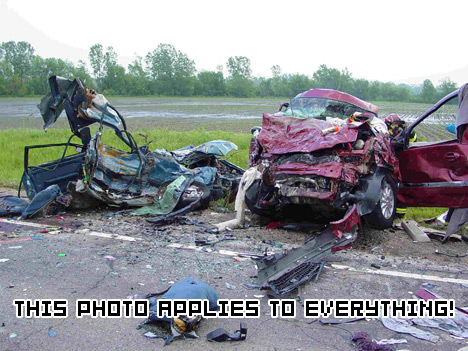 The New Zealand Herald ran a story earlier about three of their teenagers who, like most teenagers, are (were) terrible drivers and managed to get themselves into a high speed police chase that ended in their deaths. That’s all well and good, but then we have Maurice Williamson (the National Transport Spokesman) saying that video games are somehow at fault! Here’s a quote:

“Three Auckland teenagers were killed when the vehicle they were in crashed off the Northwestern Motorway in Auckland during a high-speed police pursuit on Christmas Eve.

National’s transport spokesman Maurice Williamson says today’s young people think they are bullet-proof. He blames Playstations and X-boxes for making teens think they can drive stupidly and just push the reset button if anything goes wrong.”

Hold on just one second!

Have we really reached the point where we can blame literally anything on video games? Could I say that Quake 3 somehow retroactively caused the Holocaust, or that Katamari Damacy was responsible for that hurricane that hit Thailand? Sure, it’s been scientifically proven that prolonged exposure to Halo raises the likelyhood that one will wear a polo shirt with a “popped” collar or that they would ask their “bros” for help doing a “keg stand”, but until these kiwis show me some proof of their claims, the only thing I’m going to draw from this article is that they need to spend more time with Gran Turismo.