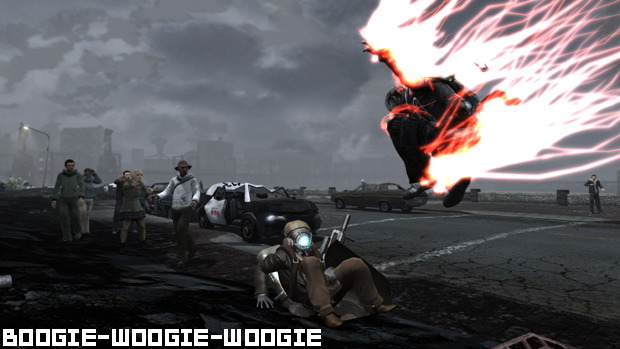 Please, God, let there be someone else who finds that caption funny. I’d hate to be alone in this world.

Sony released a new trailer for inFAMOUS today and it’s pretty damn cool. This video is focused on how you’ll travel throughout Empire City, be it across the rooftops, on power lines or using the elevated train. It also shows a little bit of combat but it’s really only in service to the main goal of depicting the game’s environments. Check it out after the jump.

I had a chance to play inFAMOUS last week, and I’m pretty interested in the title based on what I’ve seen. I haven’t laid down money on a pre-order just yet, but I’m seriously considering it, because running across the environments is just super-fun.

Rather than waste your time with my incoherent ramblings, I’ll just recommend that you read Samit’s preview. And check out the gallery for some “electrifying” new screenshots. Har har har.