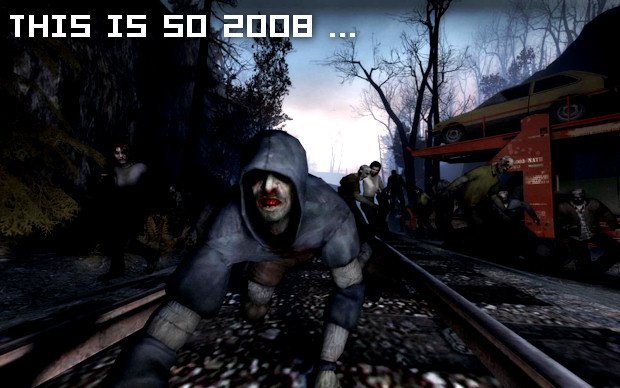 We had the distinct pleasure of visiting Valve’s studio this past week to get a personal look at Left 4 Dead 2 and chat to the brains behind this year’s big zombie shooter. Coming soon, we have a lengthy interview with series writer Chet Faliszek, where we ask a number of burning questions, such as the one that’s been bugging me for weeks — will the Hunter, Smoker, Boomer and Tank be getting new models, or will they just be recycled from Left 4 Dead as previews indicated?

“One of the weird things with Left 4 Dead 2 is that we’re not showing a finished product, yet it plays like a finished product, so all those guys are getting re-skinned and remodeled,” Chet answers. “They’re going to be mutated to the area — it’s the South, it’s a little hotter. A guy running around in a hoodie is gonna be a little rare. We haven’t shown that yet, we’re gonna be showing it … actually I don’t know when we’re going to show it, but it’ll be shown before release.”

In addition, Chet revealed that the re-skinned Special Infected would have new vocal recordings as well.

My biggest gripe with Left 4 Dead 2 after playing it at E3 was the fact that the original Special Infected were using the same models as their L4D1 counterparts, so learning that the original creatures are getting brand new looks is a brilliant bit of news for me.

It’ll be really interesting to see how the Special Infected become more localized to the South. A Hunter in dungarees really would look a bit odd, though.