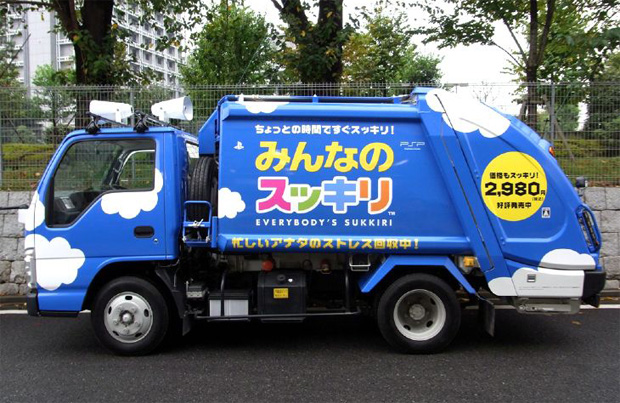 That’s not to say that the new Hot Shots game is trash, though that’s what you’ll find it hanging around.

Minna no Sukkuri means “Everyone’s Refresh.” Yeah. It’s a new PSP game from the Hot Shots people. I toyed with the minigame collection on the Tokyo Game Show floor for a few minutes, made that fake smile, shifted my eyes to the left, and then went off to another game. They should have stopped with Golf, but now they’ve got some trash truck running around Japan promoting their game. And really, what does that say about their game. Are they not putting two and two together?

What makes even less sense is that cute girls come out of said trash truck, armed with PSPs running the demo of the game. Andriasang says that if you play, you’ll get a certificate that says that you’ve been properly refreshed. Oh, and the refresh girls have a Twitter feed, of course.