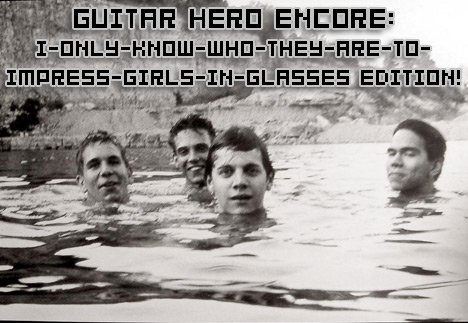 Gamers absolutely love the Guitar Hero franchise. It simultaneously satisfies their innate desires to rock things in ways generally attributed to hurricanes, while filling the void in their lives reserved primarily for shmups, X-Treme Needlepoint and any other activity that causes spiral fracturing of the metacarpals.

With that said, the track list for the upcoming Guitar Hero Encore: Rocks the 80s is kind of a let-down. To wit, a snippet from a press release we just received detailing some newly announced tracks:

Maybe it’s the elitist in me that cries out for Slint, Dramarama, and the occasional ironic Huey Lewis cover, but the songs included here are the 80s equivalent of My Chemical Romance or Avenged Sevenfold! Oh, wait …

Songs Made Famous by Artists Such as Skid Row, Poison, and Eddie Money Are Added to Enhance the Axe Shredding Experience

Activision maintains operations in the U.S., Canada, the United Kingdom, France, Germany, Italy, Japan, Australia, Sweden, Spain, the Netherlands and South Korea. More information about Activision and its products can be found on the company’s World Wide Web site, which is located at www.activision.com.

Cautionary Notes Regarding Forward-Looking Statements:  The statements made in this press release that are not historical facts are “forward-looking statements.”  These forward-looking statements are based on current expectations and assumptions that are subject to risks and uncertainties.  The company cautions readers of this press release that a number of important factors could cause Activision’s actual future results to differ materially from those expressed in any such forward-looking statements. Such factors include, without limitation, the findings of the special sub-committee, the effect of the special sub-committee’s review and conclusions on, and other developments in, the informal inquiry opened by the SEC in July 2006 and the derivative litigation filed in July 2006 against certain current and former directors and officers of the company, the possibility that additional claims and proceedings will be commenced, including additional stockholder litigation, employee litigation, and additional actions by the SEC and/or other regulatory agencies, and direct and indirect expenses and diversion of management time resulting from or relating to the special sub-committee review and related regulatory proceedings and litigation, the company’s ability to timely file required reports with the SEC, and the possibility that the company will be subject to delisting from The Nasdaq Stock Market due to its inability to timely file periodic reports under the Securities Exchange Act of 1934 or failure to satisfy other requirements for continued listing.  Other factors that could cause Activision’s actual future results to differ materially from those expressed in the forward-looking statements set forth in this release include, without limitation, other litigation (unrelated to stock option granting practices), sales of the company’s titles, shifts consumer spending trends, the seasonal and cyclical nature of the interactive game market, the company’s ability to predict consumer preferences among competing hardware platforms (including next-generation hardware), declines in software pricing, product returns and price protection, product delays, retail acceptance of the company’s products, adoption rate of new hardware and related software, industry competition, rapid changes in technology and industry standards, protection of proprietary rights, maintenance of relationships with key personnel, vendors and third-party developers, international economic and political conditions, natural disasters, integration of recently acquired subsidiaries, and identification of suitable future acquisition opportunities. These important factors and other factors that potentially could cause actual future results to differ materially from current expectations are described in our filings with the SEC, including the company’s most recent annual report on Form 10-K, quarterly report on Form 10-Q and current reports on Form 8-K.  Readers of this press release are referred to such filings. The forward-looking statements in this press release are based upon information available to the company as of the date of the release, and the company assumes no obligations to update any such forward-looking statement.  The company may change its intention, belief or expectation, at any time and without notice, based upon any changes in the enumerated factors or in the company’s assumptions, or otherwise, and forward-looking statements believed to be true when made may ultimately prove to be incorrect. These statements are not guarantees of future performance and are subject to risks, uncertainties and other factors, some of which are beyond the company’s control and may cause our actual results to differ materially from our current expectations.

Filed under... #Does it suck?#Guitar Hero#Not what I had in mind