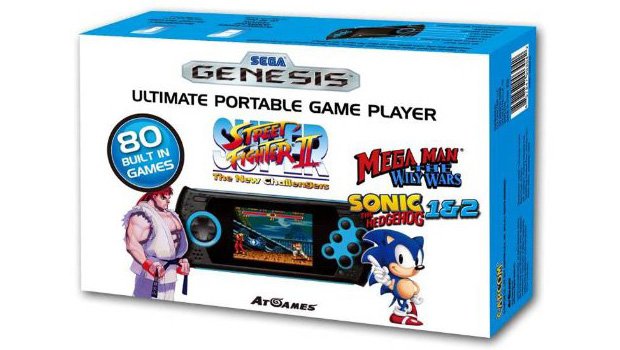 Only previously available in the US on the Sega Channel

[Update: tav7623 mentions that the full game listing appears on the At Games website.]

Sega is a whore, plain and simple. How many different Genesis collections has the company pumped out in the past decade? There have been releases on every home console, handheld, and PC device. Most egregious are those disgusting third-party standalone contraptions, which bundle a dozen or so games and are sold at Target and Walmart for around $20. How desperate is Sega for money that it continues to cling to the one generation a Sega console was actually viable?

At first glance, the At Games Ultimate Portable Game Player looks like every other Genesis collection on the market. Releasing on November 13 for $59.99, it admittedly has a beefy software count of 80+ games built in, including 37 from Sega, three from Capcom, and 40 from other unannounced publishers 40 generic non-Genesis games for some reason. Surprising no one, Sonic the Hedgehog 1 and 2 are on there, and I guarantee Golden Axe and Streets of Rage will appear as well. But it’s one of Capcom’s contributions, Mega Man: The Wily Wars, that gives me reason to pause.

The Wily Wars, for the uninitiated, is quite the elusive prize for American Blue Bomber fans. Featuring Super Mario All-Stars-style remakes of the first three NES Mega Mans plus an exclusive fourth mini-game called “Wily Tower,” it only received physical release in Japan and Europe, relegated to the Sega Channel online distribution service in the US.

Since Sega Channel games were only temporarily stored into memory, you’d have to re-download them once you turned off the machine. Obviously, this also meant that the few service-exclusive games — which also included Treasure’s Alien Soldier, Game Freak’s Pulseman, and others — were gone for good once the service was eventually discontinued.

By now, those itching to play The Wily Wars would have played a ROM of either the European or Japanese versions. That hasn’t stopped folks from requesting a re-release on Virtual Console or some other service. The Ultimate Portable Game Player may be your only chance to legally purchase this gem in a non-import format. Such devices have been reported to have tons of emulation errors, but if you’ve been played any Genesis collection in the past decade and didn’t mind any of their numerous issues, you probably won’t have a problem here.

I don’t have to buy this, personally. I own the Japanese original. I can play it whenever I want. Na na na boo boo.