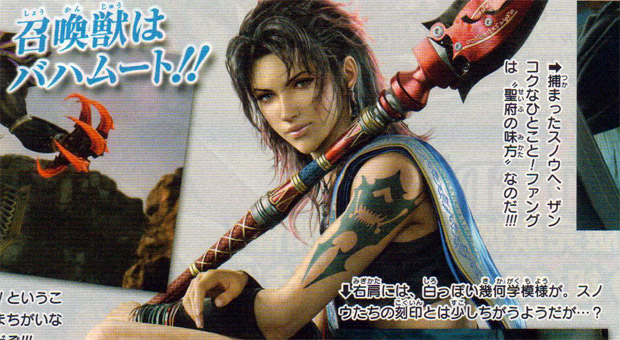 Nice, Square Enix. Hair from the 1980’s and a funky spear. I suppose you’re going to tell me that she can also summon Bahamut? Wouldn’t that be f’n nuts?

Oh, wait. She can summon Bahamut. Chinese Joan Jett might look familiar to some. She popped up in the Final Fantasy XIII trailers that came out of Japan last month. Oorba Yun Fang is her name, and poking things with her spear is her game. If you squint while looking at these Shonen Jump scans, you can see that her summon is the mighty Bahamut, whose name appears larger than his actual picture. Fail. I’m sure he’ll look fantastic in person, though.

Speaking of summons, Sazh’s is also pictured in the scans. The Japanese text reads closest to Brunhild, which may be related to what I found on Wikipedia, Brynhildr, a Valkyrie of Norse mythology. Don’t quote me on that last bit.

[Thanks for the scans, Crunshii]