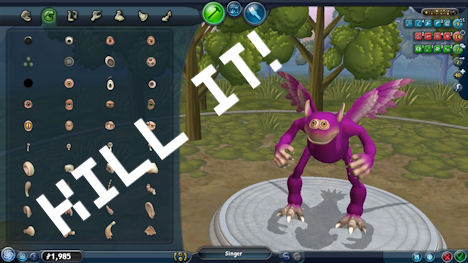 The furor over Electronic Arts’ decision to put SecuROM in its products has resulted in two new class-action suits. They were both filed with the U.S. District Court for the Northern District of California.

Interestingly, the allegations include EA deceptively spiking its free download, the Spore Creature Creator, with SecuROM. Richard Eldridge, who has filed this particular complaint, states that the act “constitutes a major violation of computer owners’ absolute right to control what does and what does not get loaded onto their computers, and how their computers shall be used.”

Dianna Cortez filed the other complaint, which is aimed at The Sims 2: Bon Voyage. She alleges that the controversial SecuROM program gave her computer problems and stopped her accessing files on her USB flash drive or iPod.

Of course, this all has to be proven in a court of law, but if the accusation of SecuROM in the Spore Creature Creator is true, then I have to seriously question what the Hell is wrong with Electronic Arts. It’s free, it doesn’t need DRM. The only explanation is that EA used the free download to duplicitously safeguard against future “piracy” on that computer by smuggling through the DRM in advance. That is one of the most vile things I’ve heard of in this growing war against piracy and second-hand sales. I’m no fan of lawsuits, but if the Creature Creator allegation is true, I hope EA gets toasted.