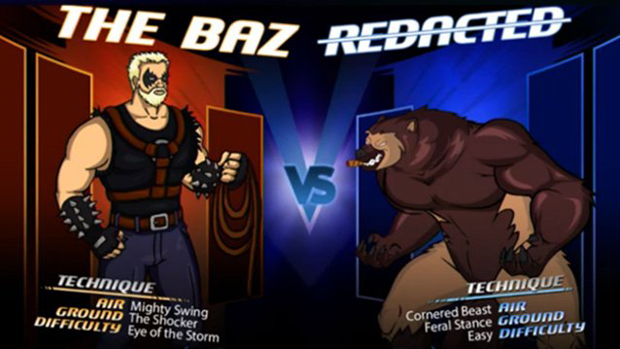 [Update: According to comment from Woolie Madden of the Two Best Friends series “Dave Lang and Adam actually put him [The Baz] in the game because Matt and I asked for him as our ‘create your own character’ donation reward [on Kickstarter]. They honored all supporters after the campaign was cancelled. So we created him, they put him in”. So that’s the scoop on how The Baz got into Divekick. Thanks, Woolie!]

Once again, Adam “Keits” Heart and the team at Iron Galaxy have managed to put a new spin on simple idea. The Baz is the latest entrant to the roster of Divekick, the two-button fighting game about diving, kicking, and not much else. The Baz makes a name for himself with an indirect approach to combat. His primary attack causes him to leaves a trail of lightning behind him after diving horizontally across the screen. It’s the lightning, not The Baz’s mighty feet, which fell his foes. Pair that with his whip-aided, Spider-Man-style swing, and you have a truly special man indeed.

It seems that The Baz is Iron Galaxy’s riff on Zubaz, a rejected character design from Street Fighter II. I applaud the Divekick team for picking up where Capcom left off, and hope that this is just the start of many revived Street Fighter design rejects. Brazillio must rise again.