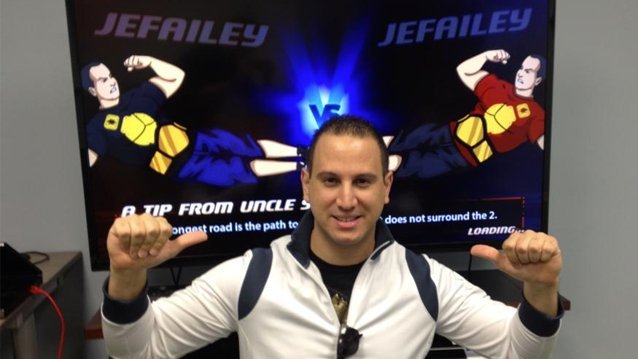 Jefailey is the latest character to be revealed for Divekick!, the “two buttons, no controller” fighting game from Adam “Keits” Heart and Iron Galaxy studios. Like the recently announced style changing character Uncle Sensei, Jefailey works to distill a fighting game move-set trope to its essence and kick you in the head with it.

Jefailey is based on fighting game organizer Alex Jebailey, equipped with powerful special moves like the relatively risk-free “disqualification” air-projectile. Those advantages are balanced out by a hydrocephalic handicap. Jefailey’s head grows every time he wins a round, increasing the size of his hitbox, making him much more vulnerable to attack. He’s a brilliant parody/re-imagination on the “glass cannon” concept, sure to be hit with players who are attracted to powerful, risky gentlemen.

Iron Galaxy is revealing a new Divekick! character every Monday on their live stream. My bet is that a stretchy-legged, slow moving man made of chewed up Mentos is coming next. It seems like as long as there are dives and kicks involved, anything is possible in the world of Divekick!.