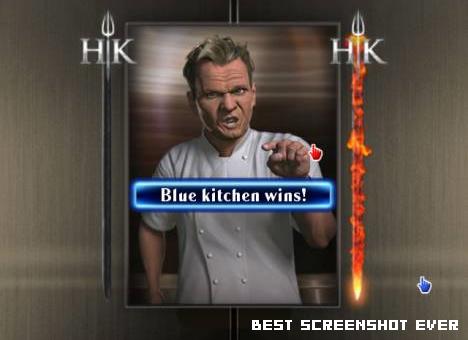 The latest season of FOX’s hit series Hell’s Kitchen may have come to an end this week, but fans of the incredible reality show can get their Gordon Ramsay fix come September 2008 when Ubisoft’s Hell’s Kitchen: The Video Game (sic?) is released for the Wii, Nintendo DS, and PC.

I am not going to lie; I only agreed to post this information because I am absolutely obsessed with this show. To my pleasant surprise, though, Hell’s Kitchen: The Video Game actually sounds like a lot of fun! If it is even half as entertaining as watching chefs gets horribly criticized and called “FAT DONUTS!” by a surprisingly likeable British chef, then count me in!

With various single and multiplayer modes, players are required to cook food for increasingly demanding customers, all the while being screamed at by Gordon Ramsay’s actual voice and likeness. Of course, this being a Wii and DS game, preparing the food is made more interesting by utilizing creative motion and touch screen control. In a cool twist, players can even unlock actually recipes (including some of Ramsay’s own) as they progress through the game.

Sounds like a good time, especially for fans of the show. What do you think? For all you non-fans, does Hell’s Kitchen: The Video Game interest you in the least?

Hit the jump for the full press release and check the below gallery for screens.

SAN FRANCISCO – July 10, 2008 – Today Ubisoft announced that it will publish Hell’s Kitchen(TM): The Video Game, for Wii(TM), Nintendo DS(TM), PC and Mac®. Developed by Ludia, Hell’s Kitchen: The Video Game is based on the U.S. hit FOX television program from Granada America featuring world-renowned Chef Gordon Ramsay. The game will allow players to experience the show’s high-pressure kitchen and dining room challenges as a faithfully rendered 3D Chef Ramsay watches their every move.

“I had a great time doing the voice for my own animation,” said Gordon Ramsay. “Being in a video game is a new experience for me and I’m very pleased with the results.”

After executing the three phases of an order – preparation, cooking and service – Chef Gordon Ramsay will score each meal. As they progress through the game, players will be rewarded with access to recipes from Chef Ramsay’s own repertoire.

“Hell’s Kitchen has everything a great video game needs: pressure, excitement and intense competition,” said Tony Key, senior vice president of sales and marketing at Ubisoft North America. “We are very excited to be bringing the intensity of celebrity chef Gordon Ramsay and the Hell’s Kitchen experience to the virtual world this fall.”

Hell’s Kitchen: The Video Game will be released worldwide September 2008.

Key Features:
•       Chef Ramsay watches players’ every move and judges them as they progress by yelling at them, praising them or shutting down the kitchen if their skills don’t meet his expectations.

•       As players progress, they’ll gain access to authentic Gordon Ramsay recipes, including many that are offered exclusively to game owners.

•       In Career Mode, players can earn stars to build their way up from a Single-Star restaurant to a prestigious Five-Star establishment. As the player advances through the ranks, their star rating advances and the recipes become more varied and intricate.

•       In Arcade Mode, the pressure builds as customers become increasingly demanding. Players will be challenged to keep up with the pressure before time is up, or Chef Ramsay loses patience and closes the kitchen.

About Ubisoft
Ubisoft is a leading producer, publisher and distributor of interactive entertainment products worldwide and has grown considerably through a strong and diversified line-up of products and partnerships. Ubisoft has offices in 25 countries and sales in 55 countries around the globe. It is committed to delivering high-quality, cutting-edge video game titles to consumers. Ubisoft generated sales of 928 million euros for the 2007–08 fiscal year. To learn more, please visit www.ubisoftgroup.com.

About Hell’s Kitchen
Hell’s Kitchen has been a TV phenomenon since its launch on FOX in June 2005. Featuring the acerbic Gordon Ramsay, Michelin 3-star chef and author of several books, the show has consistently delivered solid ratings. Season 3 showed 11% growth over the previous year with adults 18–39 and 12% with total viewers, and was first in its Monday 9PM time slot among adults 18–34 and teens. Season 3’s finale garnered 9.8 million viewers, and consistently attracted 7.5+ million per episode. Viewership for the season 4 premiere hit 12.69 million, with at least 11 million per episode throughout the broadcast season. Season 4 ranks as the No. 1 rated program of the Summer among virtually all key demos.

About Ludia
Ludia creates and distributes cross-platform interactive entertainment with mass consumer appeal. Ludia’s innovative and high-quality product portfolio consists of original and branded properties, including American Idol®, The Price Is Right(TM) and Hell’s Kitchen(TM). Based in Montreal, Canada and founded by experienced industry players, Ludia completed its first round of financing from private investors last year.

About Granada America
Granada America is the U.S.-based production entity of ITV plc, one of Europe’s largest producers and broadcasters of quality television programs. Based in Los Angeles and New York, Granada America produces drama, reality, comedy and documentaries for the American market.

Hell’s Kitchen (TM) & © ITV Productions Ltd. 2008. Licensed by Granada Ventures Ltd. All Rights Reserved. 2008 Ludia Inc. All rights reserved. Published and distributed by Ubisoft Entertainment under license from Ludia Inc. Ubisoft, Ubi.com, and the Ubisoft logo are trademarks of Ubisoft Entertainment in the U.S. and/or other countries. Wii and Nintendo DS are trademarks of Nintendo.