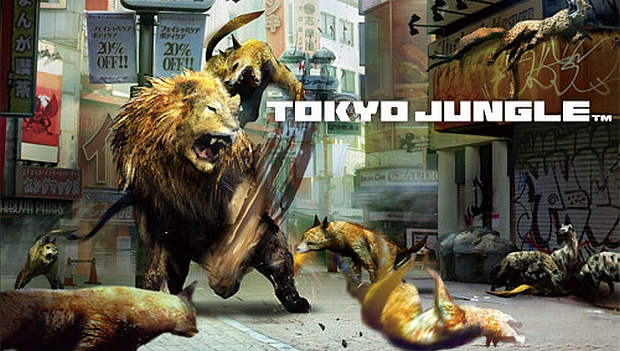 When I posted about Tokyo Jungle yesterday, I noted that the game promised something called “hunting action.” Many of you took this to mean that Tokyo Jungle was yet another contender for Monster Hunter‘s dominance of the monster-hunting game space, except this time involving real-life endangered species.

However, now that our available information level has upgraded from “blurry Famitsu scans” to “low-res Famitsu screens”, you might be happy (or disappointed) to know that Tokyo Jungle is no Monster Hunter clone. Instead, it looks like a weird sort of side-scrolling action-adventure, where you play as an animal roaming the apparently depopulated city of Tokyo in the year 20XX. Yes, friends, they still use “20XX” as a year designation.

The game’s “story mode” takes you through a campaign focusing on the trials and tribulations of several newly liberated animals, including a racehorse looking for competition and a pomeranian looking for snacks. “Survival mode” has you, well, survive as any of over 80 selectable animals, including lions, tigers, crocodiles, beagles, and what is clearly a reference to Japan’s genius chimpanzee, Pan-kun.

Now, if you’re wondering how, exactly, those crazy people at Sony thought of something like this, know that Tokyo Jungle comes from the PlayStation C.A.M.P. (for “Creator Audition Mashup Project), a development initiative that spawned such titles as Echochrome, Patchwork Heroes, and the My Lord/Badman series.

So yeah, weird. And totally desirable! Are you in? Will you be the controller animal?!