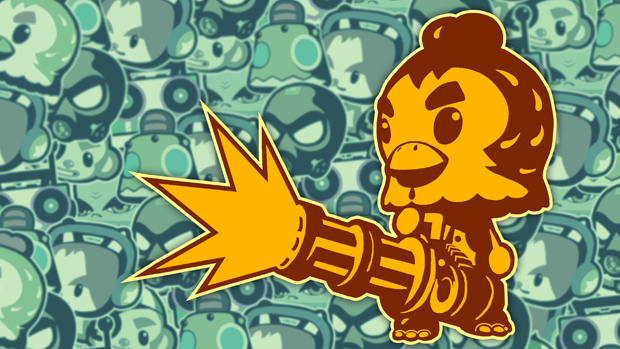 Last year, Spicy Horse (the Shanghai-based development studio founded by American McGee in 2007) began to focus on developing casual, free-to-play titles for social platforms. Now, the fruits of that labor are starting to manifest and Big Head Bash, one of three projects the studio is currently working on, is shaping up to be rather interesting.

In Big Head Bash, players are transported to a virtual toy store where the toys just can’t seem to get along. Armed with all manner of bizarre and fantastic weapons, they wage a constant battle with one after the store closes for the night. Players will control one of these toys in team-based, 2D platforming arenas, racking up kills to earn new toys and new weapons to wreak still more havoc with. 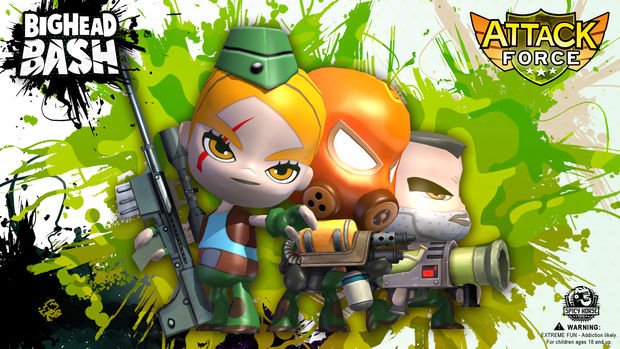 Attracted to the collectible vinyl toy movement in recent years, which has seen massive growth as artists continue to create a seemingly endless supply of creative and beautiful toys, Spicy Horse wanted to tap into that collector’s spirit for Big Head Bash. Players will be able to show off their collections in a customizable display case with a constantly growing selection of backgrounds and accent items.

“What I like about it,” says American McGee, “is that people instantly understand the idea of collecting, playing with and trading vinyl toys. In recreating this in the game environment we give people the option to move some of their collecting impulse online – and to share their collections instantly with friends around the globe. Anyway, if I’m playing an online game I’d rather collect toys than cows!”

Spicy Horse plans to create a huge variety of these toy designs, based on their own properties as well as those of popular vinyl toy designers, licensed characters from films and comics, and other avenues of popular culture. 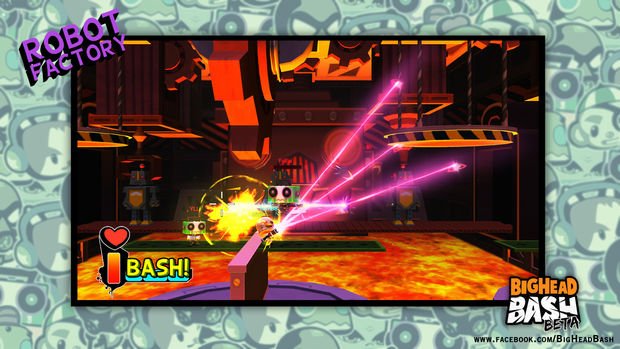 In play, Big Head Bash is a platforming arena shooter in which two teams of players battle it out against one another. Each player can take two weapons into the match, weapons which include your standard guns as well as more creative implements of death such as the “Floatron,” a rifle firing a slow-moving projectile which can be bounced off of the environment before it detonates. Other weapons have curious aesthetic functions in addition to causing damage, like leaving behind flowers at the point of impact when using a “Flower Gun.” Just as with the toys, Spicy Horse plans to continually expand the weapons repertoire over time.

One of the goals Spicy Horse set forth in creating these new free-to-play games is that they have all the polish you would expect from a retail release. Using Unity3D, they’ve crafted rich, beautiful stages full of visual elements which are just as much fun to stare at as they are to shoot people in. Likewise, the toys themselves have a fantastic level of detail, complete with a glossy finish which makes them pop right off the screen.

Over the last several weeks, Spicy Horse has been engaging in network testing and are preparing to launch a closed beta soon. To that end, they’ve partnered up with GameStop’s online game distribution system, Kongregate, as the launch platform for the browser-based title.

“We are thrilled to be the exclusive launch partner for Big Head Bash” said Jim Greer, CEO & co-founder of Kongregate. “American McGee is a veteran and a visionary and has put together a great team at Spicy Horse.” Jim added, “Spicy Horse’s take on side-scrolling deathmatch adventure-shooter will be perfect for our mostly hard core players. We look forward to showcasing Big Head Bash to Kongregate’s audience of more than 16 million monthly gamers.”

Not wanting to be outdone by all of this announcing, we at Destructoid have a little surprise as well. Mr. Destructoid will be available as a playable character in Big Head Bash. In addition to being a snappy dresser, Mr. Destructoid also brings a massive cock — gun, that is. The cock gun will fire explosive roosters from its rear because if there’s one thing which says “class,” it’s combining a dick joke with a poop joke and wrapping it in an explosion. You’re welcome.

Players can go and sign up for the closed beta of Big Head Bash right now over on Kongregate, with the beta opening up later this spring. To keep abreast of the latest news on the game, focus your gaze on the official Big Head Bash website.