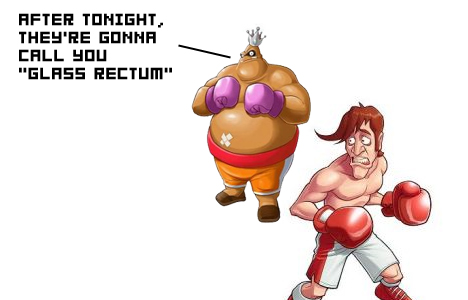 We haven’t heard a whole lot about the upcoming release of Punch-Out for the Wii, other than it’s going to release in May and have a rating of “E 10+.” Why Nintendo has kept so quiet about a game that has the potential to satisfy a lot of the detractors amongst the hardcore Nintendo fans who miss their old games is baffling, but they’ve finally conceded to offer up a little more info by way of a fact sheet that GoNintendo has posted.

There’s a little bit of info on the characters who will be appearing, referred to as the “best of the original Punch-Out! cast” and confirming the appearance of Von Kaiser. “Star Punches” will be returning as well, though we still don’t know if they’ll be acquired in the same fashion as before.

Most important, however, is confirmation that Punch-Out! will have two control schemes available to players. The obligatory motion controls in nearly every Nintendo-developed game for the console will be here but they’ve also deigned to include classic, NES-style controls. Yup, just flip the Wii Remote on its side and play the game the way God intended.

Thank you, Nintendo. Punch-Out! is the game I play on my NES more than any other. I was wary of the update at first, but the news of this control system has put all of that to bed.

This is now a day-one purchase for me. How about the rest of you?