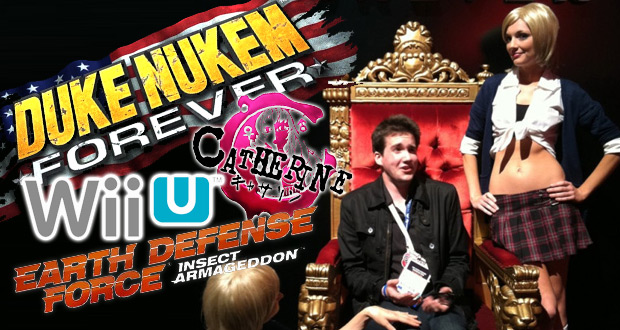 Hey gang, long time no typing. In the wake of E3, I am suffering from what the experts are referring to as “nerd flu,” but which is more likely a hybrid of the T-Virus, Captain Trips, and the Legacy Virus. In spite of Kinect being the most sterile way of playing games (you don’t touch anything!) I still managed to become gross.

On today’s show, I am forced to address the issue that is Duke Nukem Forever‘s totally abysmal review scores. Then, some screens for H.G. Wells’ The War of The Worlds, and the big reveal of who’s doing the narration. Details on the pre-order bonuses for Earth Defense Force: Insect Armageddon. Tara talks about the Wii U, which is a device fills me with a mix of boredom and rage. There’s some noise about EA’s new PC gaming platform, Origin, which will probably ruffle some feathers. Finally, I decided to embarrass myself with idiotic statements regarding Catherine, which is coming stateside in about six weeks.

Now, if you’ll excuse me, I’m going to drink Nyquil and watch cartoons because cartoons have anti-oxidants in them.

(And by anti-oxidants, I mean Popeye.)