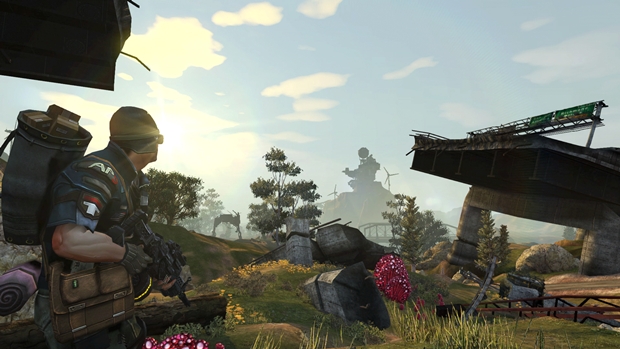 Trion Worlds’ upcoming videogame and television show hybrid, Defiance, is almost upon us and I must say that this game has caught my attention. I mean, the fact that whatever transpires in the TV show will affect the online open world shooter and vice versa sounds like something that could attract quite a large fan base — so long as it’s executed properly.

But anyway, with the April 2013 release date looming, Trion Worlds has gone ahead and given us a list of pre-order bonuses along with details on the Defiance Digital Deluxe, Collector’s and Ultimate Editions. Trion has also thrown in a live action teaser trailer teasing the release of the full live-action trailer. Teaser-teasing.

Pre-ordering now will grant you beta access to the game, as will our awesome giveaway.

Ultimate Edition ($149), available only at GameStop, adds the following to the Collector’s Edition:

Any of these editions tickle your fancy, or has Trion gone a bit over the top with this?