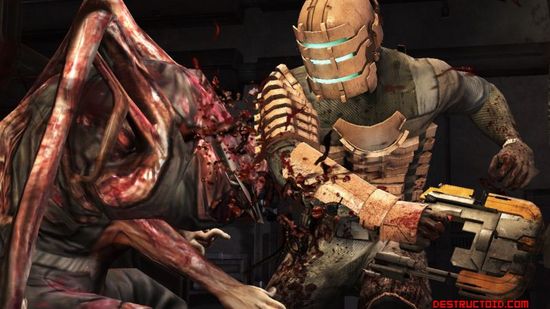 The developer blog for EA’s Dead Space has a couple of little interesting new details in regards to the game. First up on the game end, it’s revealed that there is going to be no cut scenes in the game at all. The entire story is going to be told in the game through live scripted events. There are also going to be video and audio logs spread through out the levels, which makes me think of BioShock’s story telling system. Glad to see that’s really catching on. The team is currently working heavily on the story aspect of the game. I really want to hear all the temp voice acting that’s they’re listening to right now. It has to be so hilarious.

We’re also given some small details on the animated feature and comic side of Dead Space. I don’t know about you, but I just love it when additional stories are given to a videogame through other mediums (i.e. Halo, Tomb Raider, etc).

There’s also some talk about cake that’s flavored with caramel, butterscotch, buttercream, frosted chocolate, and mayonnaise hybrid thingy. It sounds gross, but it apparently isn’t. Oh and hey, it looks like Chuck Beaver wants you all to harass him on the blog. Go leave some questions about anything in regards to the story, comic, and animated feature if you have any. Who knows, maybe they’ll reveal to us some new details.