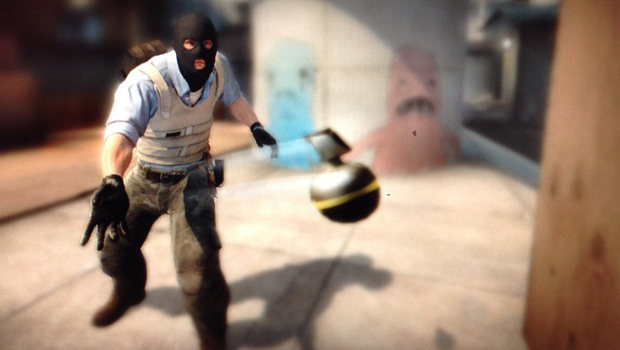 Counter-Strike: Global Offensive has received a rather sizeable update, which includes the introduction of Sticker Capsules, a secondary firing option for grenades as well as a behemoth of map and gameplay changes. Sticker Capsules can be obtained via drops at the end of matches, and each contain one sticker that players can stick (no need to lick them first) onto their weapons. In order to get a sticker outside of a capsule you’ll need to have a Sticker Capsule Key.

The other big addition to this update is the alternate firing mode for grenades; players can now throw all types of grenades in an underhand manner which will land a short distance in front of the player. On top of this, the secondary and primary fire mode can be combined in order to adjust the power of the throw.

As for the map and gameplay changes, and there are a lot, and include weapon balances, changes to the user interface & several maps to make things a bit more fair.

Check out the full patch notes below.

It’s been a while since I last played Global Offensive, but with the launch of this update I’m going to try and get back into it. Anyone else in a similar position?

– Added Sticker Capsules. Each capsule contains one sticker out of a series of sticker designs.
– Sticker Capsules can be received as drops at the end of matches, and are opened using a Sticker Capsule Key.
– A sticker can be applied to any gun, and each gun can hold multiple stickers.

– Several adjustments to improve performance for a range of hardware configurations.
– Ended Operation Bravo.
– Overpass and Cobblestone maps are now available to everyone.
– Removed the following items from the store:
— Season’s Gifts. They are still marketable on the Community Marketplace and remain fully functional.
— Operation Bravo Passes. They are still marketable on the Community Marketplace and can be redeemed for an Operation Bravo Coin.
– Doing an ent_create now orients the created entity opposite the player’s orientation so it’s facing the player.
– Added a new material type called ‘Lightmapped_4WayBlend’ that can be used on displacements. Documentation can be found here:https://developer.valvesoftware.com/wiki/Lightmapped_4WayBlend
– Added more diagnostic information for buffer overflows in network channel.

– Removed rouge [sic] pixel on mode map selection UI.
– Added player teammate colors in Competitive Mode that displays a unique color per teammate in the radar, playercount panel, scoreboard and the arrow over their head (can be toggled offline with cl_cmm_showteamplayercolors).
– Reduced translucency of avatars in playercount panel and did some minor visual updates.
– Enemies icons on radar are now a different shape than teammates.
– Hostages on radar now have an H in the dot and never rotate.
– Added sort method ‘Equipped’ to the Inventory.
– Added a setting to Game Options that allows hiding Team Tags in death notices.
– Team tags now scale to fit in the scoreboard and no longer overlap ping or get get cut off.
– Fixed an issue where sometimes no live games could be found in the Watch panel for the first minute after game launch.

– All grenades now have a secondary fire that throws an underhand grenade a short distance in front of the player.
— Secondary fire can be combined with primary fire to precisely adjust the strength of the throw.

– Mirage
— Fixed a bug where you could peek over a crate at CT stairs.
— Added a peek position in Bombsite A connector, towards Palace exit.
— Clipped benches inside palace.
— Fixed some boost/exploit spots (Thanks F3RO!).
— Breakable metal panels can no longer be shot through without triggering break effect.
— Made it easier to get into hole leading to CT sniper window.
— Made it easier to move over cart leading to B route from CT spawn.
— Reworked cover in Bombsite A.
— Reworked cover in Bombsite B.

– Overpass
— Changed cover in playground.
— Fixed smoke sorting on water.
— Made players easier to see in park connector stairs.
— Raised upper park divider to prevent peeking over it.
— Increased ambient lighting.
— Made bridge near Bombsite B twice as wide.
— Made it easier to spot players in T side of canal.
— Simplified the layout of Bombsite B slightly.
— Removed small tree at CT side of upper park.
— Blocked visibility through truck in Bombsite A.
— Tweaked soundscape.
— General optimizations.

– Inferno
— Fixed a bug where players could get stuck in ceilingfans.
— Fixed some areas where thrown C4 could get stuck.
— Increased brightness slightly in hallway leading to balcony in Bombsite A.
— Fixed gaps that players could see through in Bombsite B.
— Made wall penetration in construction more consistent (Thanks Pawlesslol!).
— Nerfed the refire rate on the churchbells (changed from infinite dings per second to 1 ding per second).
— General optimizations.

– Assault
— Fixed various graphical bugs.
— Fixed bugs related to prop_physics_multiplayer.
— Added a CT van to CT spawn.
— Fixed an exploit where players could get out of the map.