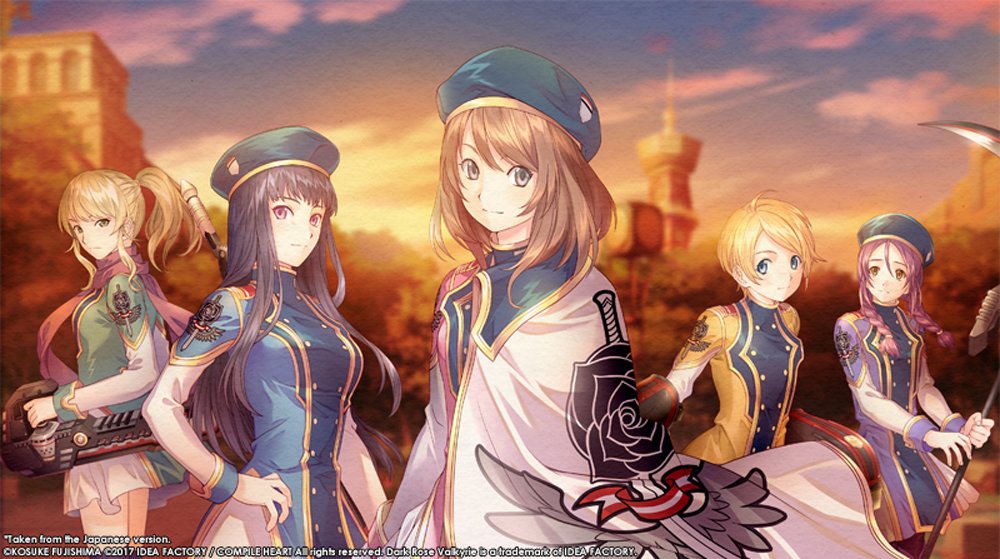 For the PlayStation 4 and Vita

With last month’s release of Super Dimension Neptune vs Sega Hard Girls, the calendar of upcoming titles from developer Compile Heart was looking a bit barren. In fact, nothing had been announced for western shores past that game.

Well, last night that changed. At a press event in San Francisco, publisher Idea Factory International unveiled three games set to hit North America and Europe in the first half of 2017, as well as a Steam release of one of Compile Heart’s better PlayStation 4 titles.

This Spring 2017, defend humanity from the Chimera Virus as the new leader of Japan’s covert military agency (ACID) in Dark Rose Valkyrie! Featuring work from “Tales of” scenario writer Takumi Miyajima and “Tales of” character designer Kosuke Fujishima, this real-time combat, action-packed RPG will have you battling enemies that change in form and strength as darkness sets. But that’s not all, a traitor is in your midst! Use a visual-novel interview system to find them out and strengthen the Valkyrie Force and save the world!

Experience the world of Hakuoki in a whole new way with this remastered telling of the beloved, visual novel Hakuoki series first developed and released in 2008. As the Bakumatsu period in Kyoto ends, the young Chizuru, determined to find her father, will romance the famous samurai of Shinsengumi through a series of engaging stories and dramatic events. Now, experience new characters, love interests, and episodes in the world of Hakuoki: Kyoto Winds this Spring 2017!

Beware! The Nightmare monster stalks you as you navigate this dungeon-crawling RPG. Stand your ground, or use traps to slow down the insatiable monsters and escape to fight another day. You’ll fight in turn-based battles and can boost up your allies with blood transformations. If you solve the dungeons’ mysteries and satisfy the prison’s desires, you just might make it out alive in Mary Skelter: Nightmares this Summer 2017!

If you’ve been following Mary Skelter at all, you know the game is quite salacious, which probably means Australians won’t be able to play it. Sorry Dennis. Idea Factory also confirmed Fairy Fencer F: Advent Dark Force, which I enjoyed on the PlayStation 4 earlier this year, will be coming to Steam in early 2017.

In case you’re wondering, missing from that list is Genkai Tokki: Seven Pirates, as well as the free-to-play NepuNepu Connect: Chaos Champions. Also missing is the PS4 exclusive Cyber Dimension Neptune, which doesn’t release in Japan until Spring of next year.