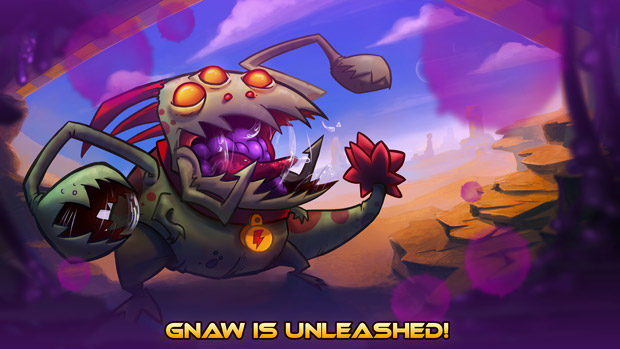 Another free character, Gnaw, was added to Awesomenauts, and I’m becoming increasingly glad that I opted to double dip with the Steam release. While it seems entirely likely that he’ll eventually end up on Xbox Live Arcade, the rate at which updates can go out on PC makes it the obvious choice between the two, particularly for a game like this where characters are constantly being rebalanced.

I played a single round with Gnaw and I think I have a new favorite character. He’s agile, has a primary attack that can do lifesteal, and the weedlings he drops work well for both pushing a turret and defending. We’ll have to see how Gnaw stacks up once players become more accustomed to his tactics.

Ronimo Games has also announced that cheaters will now be placed in their own matchmaking system so they can play against other cheaters. Nice moves!