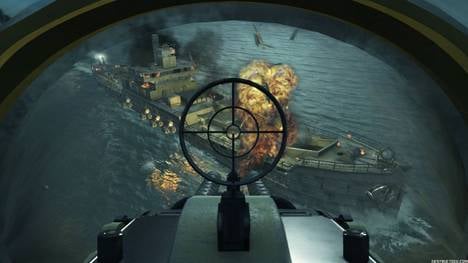 The screens highlight two new gameplay areas not previously seen by the public, both of which I had a chance to see in a first-look demo last month at Treyarch’s studio. Both show off two unique styles of gameplay in World at War, one of which is a more “on rails” experience, the other a more typical sniper-heavy first-person shooter moment.

The first level involved manning the turrets on a flying PBY Catalina boat plane in the Pacific. Attacking a Japanese merchant ship, the game controlled the path of the PBY as the player rained bullets down below, taking out spotlights, gunners, and causing massive destruction to pieces of the ship. During the demo, Treyarch placed a lot of emphasis on the damage caused to the ship; it looked impressive, with huge explosions taking off chunks of the crumbling vessel.

While we didn’t see the complete PBY level, Treyarch hinted at some gameplay that takes place later in the area, which involves landing the plane in the water. It’s unclear if control will be given to the player, but it was made to sound like you’ll continue to man the PBY’s .50 caliber tunnel guns and the like. 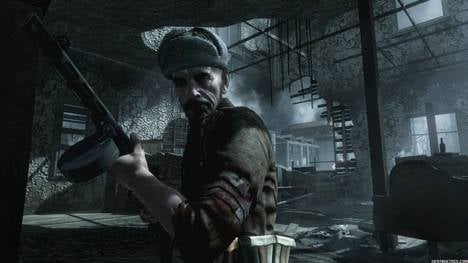 We were then shown some gameplay from the game’s European campaign, which took place in a war-torn Russian city. The level faded in, the player’s character injured and just coming to. Not far from where he was lying, an injured Russian sniper called for help; in poor health, his hands no longer steady, he asks that you man his sniper rifle for him.

“Sniping an enemy is like hunting any other animal,” he says. “Fire at the wrong moment and your chance will be lost forever.”

With an emphasis on patience and timing, the right moment here was when passing bombers would drown out the sounds of your gun fire. As they passed overhead, the Russian shouted to indicate it was time to fire, and with a steady hand the player dropped soldiers one by one. The remainder of the level was of typical Call of Duty intensity as the player and the Russian made their way through the area: lots of explosions, an escape from a burning building, and taking fire from snipers perched in building above. 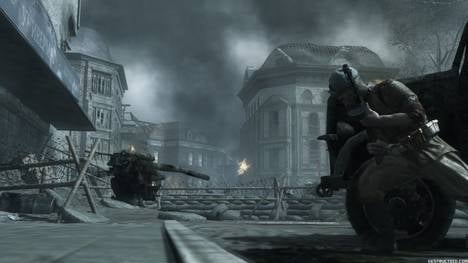 Lately, Treyarch have been taking a lot of flak for bringing the Call of Duty franchise back to World War II. But everything I’ve seen so far is looking sharp. The team looks to have taken a lot of cues from the Infinity Ward team and its work on Modern Warfare; the extra development time they’re being afforded for the title (more than double than that of their previous Call of Duty efforts) looks like it’s being put to good use.

Call of Duty: World at War

should hit the Xbox 360, PlayStation 3, PC and Wii this fall. [Note: Treyarch demoed the game on an Xbox 360; the Wii version is said to be using the same — but slightly modified — tech for its version, which should be a similar experience.]