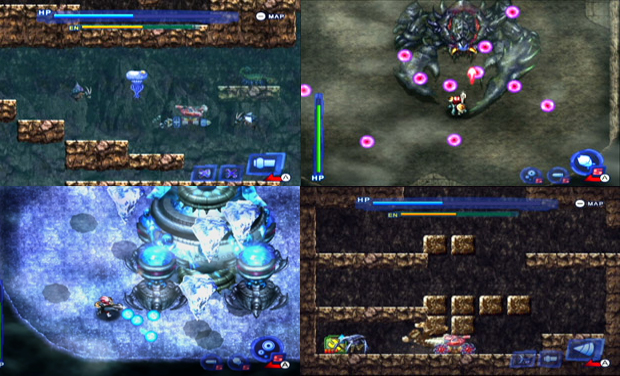 Jesus, where the hell did this come from? Did someone at Sunsoft forget to do PR for the past few weeks, or did they think that the less time we have to anticipate a game, the more likely we are to pick it up on an impulse buy?

Either way, I’ll be sure to pick up Blaster Master Overdrive when it launches on WiiWare this Monday for 1,000 WiiPoints. Ten bucks is a steal for a sequel to Blaster Master, which is easily one of my favorite NES games ever. The slightly tweaked version on the Wii’s Virtual Console was even better than the original. Infinite continues FTW.

Hit the jump for the full press release, and stay tuned for larger, less blurry screens of the game in action. Hopefully I’ll get a hold of some before the game comes out, which is in less than 48 hours.

Man, I’m so excited to fight that crab boss again. He’s such a bastard…

Redding, CA – February 6, 2010 – SUNSOFT, a division of SUNCORPORATION (JASDAQ: 6736), has today announced that BLASTER MASTER™:OVERDRIVE will be available in North America on February 8th for WiiWare.

BLASTER MASTER™:OVERDRIVE is an action-shooting game that takes place on an Earth infected by an aggressive, polymorphic virus. Poor, defenseless animals worldwide infected by the virus have been turned into flesh-eating, hemoglobin-swilling terrors. Fortunately, the world has Alex. And, even more coincidentally, he happens to be one of the world’s foremost biologists – specializing in viral mutation profiles and genetic manipulation.

Every studious biologist facing imminent global annihilation needs a sweet ride, and Alex is no exception. He has S.O.P.H.I.A., a shape-shifting, gas-guzzling, projectile-spewing paean to destruction on four wheels. Things look grim, but with Alex and S.O.P.H.I.A. on the case, the world just may have a chance.

Gameplay in BLASTER MASTER™:OVERDRIVE retains the critically acclaimed format of the original NES BLASTER MASTER™, alternating between side-scrolling platforming in S.O.P.H.I.A. and overhead-perspective blasting and exploration when controlling Alex. Upgrades for S.O.P.H.I.A. must be collected to access progressively more challenging terrain and a total of eight distinct areas. Each area features a mutant boss that must be defeated to progress.

The sublime blend of side-scrolling shooting/platforming mixed with overhead perspective action/shooting areas is just as addictive now as it was in the original game. The game is rated E10 for Mild Fantasy Violence and can be purchased from the Wii Store online for 1000 Wii points beginning February 8th, 2010.

As with the BLASTER MASTER NES Virtual Console release, fans are encouraged to improve their skills completing this game so they can compete and win in a coming promotion that will test their skill for collectible prizes.

About SUNCORPORATION. Located in Aichi prefecture in Japan, SUNCORPORATION has been innovating electronic equipment and software for almost forty years. Their corporate slogan, “Dream, Challenge, and Creation” perfectly summarizes the spirit that gave birth to their software company SUNSOFT. Worldwide, SUNSOFT has developed or published almost 100 games for both consoles and arcades. They also publish for iPhone and Windows mobile platforms.

About GAIJINWORKS. GAIJINWORKS was founded by Victor Ireland after spending more than 15 years as President of Working Designs, where he innovated deluxe packaging, special premiums, pack-in soundtracks and game documentaries for their RPG product. Many of the practices he innovated have become standard in the RPG segment, and console video games in general. GAIJINWORKS is focused on continuing a tradition of fanservice for game fans.

Information about the rating for this game can be obtained at www.ESRB.org.

“BLASTER MASTER” is a trademark of SUNSOFT