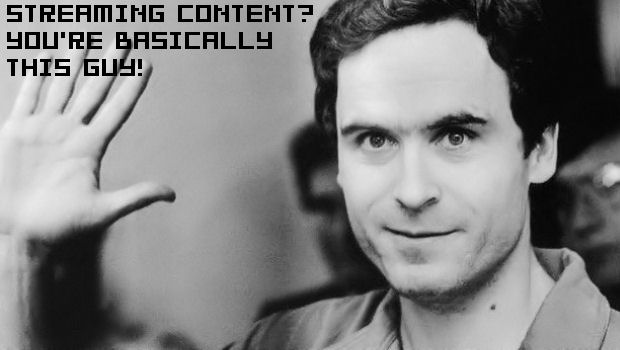 A bill has been proposed that, if passed, could mean jail time for those of us who stream videogame footage to Youtube and Justin.tv. In other words, this site, many other sites, and potentially a lot of you guys. An excellent editorial at Shoryuken explains the bill in detail.

Bill S.978, known colloquially as the “Anti-Streaming Bill,” seeks to “amend the criminal penalty provision for criminal infringement of a copyright.” Though the bill has been written with film and music in mind, the wording easily incorporates games, and many gamers are quite worried about what it could mean for them.

Videogame livestreaming has become a big part of online gamer culture, especially in the past year. Destructoid itself hosts several shows on our own Justin.tv channel, and they’ve proven to be immense fun. By turning a civil legal issue into a criminal one, the government would get to dictate our business practices and dole out ludicrously harsh punishments.

The bill has been worded in a disturbingly vague manner, preparing to slap fines and up to five years jail-time upon those who engage in a “performance” that becomes popular and makes over $2500.

This is not law yet, and hopefully it won’t be. Nevertheless, it’s disgusting how these prehistoric thinkers are still trying to fight Internet culture, rather than work with it. I can personally attest that Conrad Zimmerman and Jordan Devore’s “Saturday Morning Hangover” show has done a great job of promoting Xbox Live Indie Games, and streams across the Internet can shed light on forgotten gems and interesting new titles.

But of course, companies want all of their money immediately, with no thought to long-term benefit and the potential of viral marketing. Thus yet more online freedom is at risk in the pursuit of instant gains by infantile executives.

Hopefully, the muddy writing of the bill will see it shot down, as such imprecise proposals often are. Whatever happens, it is a grim reminder that there are many out-of-touch individuals who lack an understanding of current culture yet want to control it with unchallenged dominance.