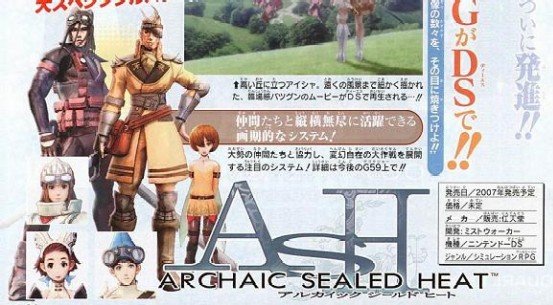 Archaic Sealed Heat (or ASH, for short) is Hironobu Sakaguchi’s first foray onto the DS. While we’ve heard nothing of Mistwalker’s newest game at E3, Famitsu, tried and true, has a scan or two and a smattering of information — just enough to whet the appetite without anything definite to latch onto. Even worse is that there seem to be a few conflicting reports.

ASH revolves around Queen (Princess?) Aisha, whose castle has been burned to the ground by the Archaic Sealed Flame. Those who have been touched by the flame turn to ash, although their souls and memories remain. As Aisha explores her world trying to unravel yet another ancient mystery, she will join up with the reanimated ashes of those burned by the flame. There also appears to be a time-travel element to the narrative.

Hit the jump for more info and new scans.

By all accounts, the game will be a graphical powerhouse, using CGI and pre-rendered visuals to narrate battles and FMV sequences. A recent Famitsu article says that the CGI sequences will be used in narration, and that, during battles, the upper screen will show the party and its stats and the bottom will feature enemies. On the other hand, an early preview notes that players will use the bottom screen to control the party while the top screen uses pre-rendered visuals to animate the battle as it happens.

However they will be implemented, ASH‘s übergraphics will be tucked snugly into the DS’s first 2 Gigabit cartridge, paving the way more games of grander scope, even more mystery (!), and graphics that may move past “cute kids with bubble-heads.”*

In any case, the battles will take place on a grid system (à la Final Fantasy Tactics Advance), between enemies and teams of three. Sakaguchi calls ASH a “team tactics” game with heavy RPG elements. I call it “on my list for this holiday season.” If you’re as intrigued as I am, then check out this teaser site, where you will find pretty music and absolutely nothing else.