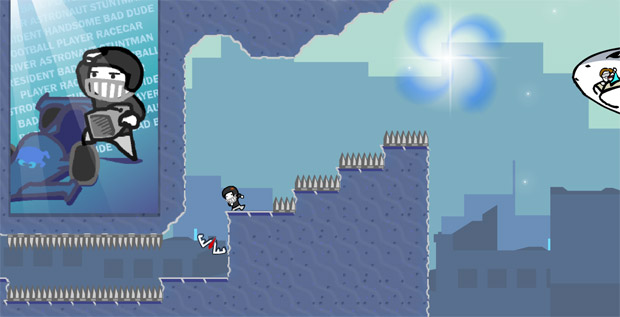 It pained me to come down hard on No Time To Explain back in my review last year, but some design issues and bugs left me no choice. The silly time-traveling platformer has since been Greenlit on Steam, and released — it’s available for $7.49, which is 25 percent off the regular price, through the end of the month. I was hesitant, but it sounds as if this release is a considerable step up from what I originally played.

According to developer tiny Build GAMES, getting on Steam required the team to essentially rewrite No Time To Explain. The end result should mean less bugs overall and more content, including: “real full-screen, performance improvements, reworked levels, more options, etc. The game has 10 unique worlds and over 100 levels, an original (and awesome) soundtrack and a character that’s in constant agonizing pain.”

A quick trip to the Steam forums indicates that some players are still experiencing issues, so don’t go in expecting a perfectly polished product here. I’ve played the first few areas and am thankful it’s gotten to where it is, even if there’s work left to be done.