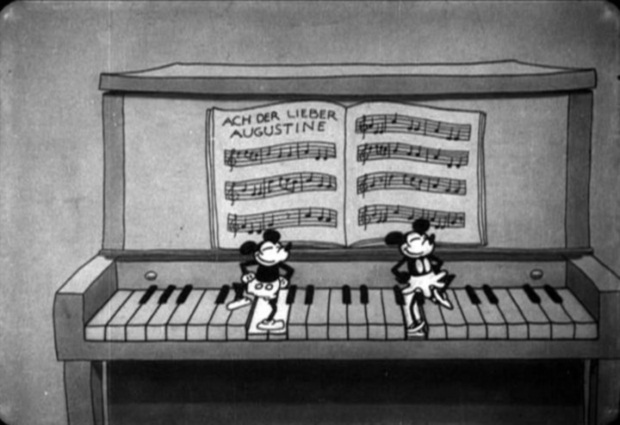 [Dtoid community blogger Alphadeus is back with another lovely album! From his brain space to the tips of his fingers to your ears, this is a journey worth taking. Want to see your own stuff appear on the front page? Go write something! –Occams Electric Toothbrush]

I released another album, 2AD14 – II. As you can tell, I’m not really a good digital artist when it comes to album art, but I do the music so I guess that works! I’m not going to just drop an embed and call it a day, I’m going to write about each song.

I figure this time, instead of slowing everyone down with embedded video, maybe I can try to get the Bandcamp embed to work instead. It should be above this paragraph.

2AD14 – II is an album in the 2ADXX series I started this year. It’s basically the year with the AD emblem representing the zero in the year. It’s “probably” going to replace Nonsensicals as the album where I just write music without a theme. The first one was released last month, and it received some positive comments.

This time around, I only rearranged 1 song from a previous album, Battle on Nostromo, Exit Ripley, Mr. Andy Dixon’s song from the Community Album. I wanted to do at least one more, but the track I decided to work on more or less froze me (I wasn’t able to figure out a decent arrangement), so I deleted it and started working on original music.

Most of the tracks this time around are the kind of music you hear in modern movies and video games. I’ve been messing with this type of sound since the first album. I tried to include other styles on there as well. Basically, whatever I fancied at the time. I’m going to write about the individual tracks.

01 – To New Beginnings: The first track, I felt, had to be a positive one after the dark, angry track that ended 2AD14 – I. It would represent a new beginning, a new album, a new outlook on things. I wanted this album to be more positive, and also to kick more ass. So I started it with this explosive song. I absolutely love how positive it is.

02 – B.O.N.E.R. ~Mr Andy Dixon~ : The updated version of Mr. Andy Dixon’s song! Now with 52% more kickass! My goal for this rearrangement, was to write something more dramatic, and again, positive. I also wanted to try out different progressions in the second half. I think it came out well. When the guitar kicks in (in both versions), it makes me want to salute, but not with my hands, if you catch my driftwood.

03 – Shattered Diamond: Of course, there has to be sad, dramatic songs on my albums. This would be one of the songs. It’s meant to play during a scene where a character considered to be one of the strongest, is destroyed in battle.

04 – Eye of the Beholder: Action strings don’t fail me! Kind of a boss battle song, inspired heavily by the work of Michiru Yamane. It includes an instrument called the “Cellosaurus”. Not much else needs to be said about this track 😉

05 – Chosen: With this particular track, I actually wanted to try to write something “pretty and generic”. Why generic? Because I’m always trying to do things that either haven’t been done before, or are uncommon. It’s a wonderful song, just the progression is fairly common in movies, is all.

06 – From the Pit of my Stomach: Not sure how to describe what I was going for here, I guess a dark, “gross” song in a sense. It picks up halfway through, has an interesting bass line that reminds me of Gato’s song from Chrono Trigger, which is kind of what I was going for. I like to toss in throwbacks to music that inspires me whenever possible.

07 – Bit by Bit: A bit unusual compared to most of my music. I used what I call a “panic progression” to create a song that sounds like it could be played during a chase. The name refers to the 8-bit instruments used. I like the fast beat as well.

08 – The Forgotten Sword: More action strings! Gotta love ’em! I was going for pure drama here. The Sword is a living being, and is upset about being forgotten! It has an interesting switch up in the middle, perhaps. I could be lying!

09 – Lost in the Stars: Fast beat, with a muted trumpet that I’m slowly learning to love. It’s quite an interesting departure from my older stuff, although I believe I’ve been writing all kinds of unusual stuff lately. I suppose that happens when you’ve written over 200 songs (possibly), and like to try new things.

10 – The Corrupt Leader of the Free World: I picked up a new Nexus expansion called Hollywood Synth, and whenever I get a new Nexus expansion, I have to write a song using as many instruments as possible to justify the purchase. And thus, this epic piece was born. The song is meant to play for a final boss character, as he sits on his throne, planning his big move. The world is free, but not for long, if this character has his way!

11 – Define: Define! One word title! I was doing so many orchestral game music pieces, I wanted to try to write something that was a kick in the teeth.

12 – To The Future: Last track on the album. Gotta go out on a chill note. Probably the slowest song on the album, and I think a great way to end the whole action-packed ride.

There were so many action songs this time around. I think this album is probably one of my more “kickass” albums. Of course I’m just tooting my own horn. You be the judge of my horrible/terrible/wonderful/okay music 😉 I hope you find something worth your time, and I apologize if they all suck. I tried my best. I’m only one person! What did you expect!

Thank you for listening, and for the years of support and positive vibes. I wouldn’t be writing music if it wasn’t for this community. At least, I think that. I don’t know where I would’ve ended up if I didn’t start posting here when I did. You guys took me in, and many of you I’ve gotten to know on a personal level. I’m really happy to know you guys.