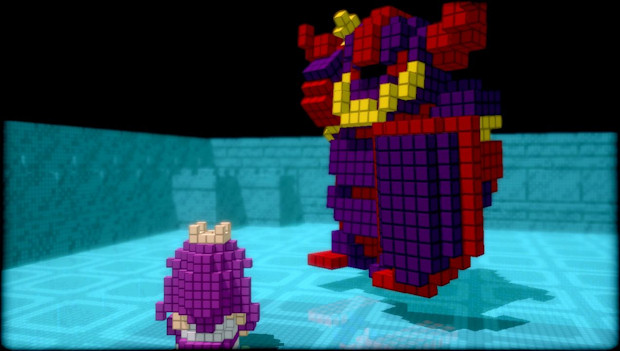 We’re all very excited for 3D Dot Game Heroes at Destructoid HQ. The Zelda-esque gameplay and self-aware sense of humor looks and sounds rather brilliant, while the bright and unique design of the game makes it look like one of the most gorgeous PS3 games of all time. Here are some new pics and a little bit of information, because we can’t stop talking about it.

The new screens show off the freshly revealed female characters. There are three character classes, and it is now known that you can choose a female equivalent of each class. Some new weapons have also been shown, titled the “Dragon Killer” and “Orichalcum,” both perfectly stereotypical names. In addition to this, there are two bosses in the gallery, a giant snake with a weak point on its tail, and a Dark Knight that is both massive and very fast.

Aniplex is publishing the game’s official soundtrack in Japan. The soundtrack will hit streets on November 25 for 2,130 Yen, and will include a special sticker and picture label. Judging from the trailer, the game will have a pretty rad soundtrack, so this might be worth trying to acquire. The game itself will release on November 5.