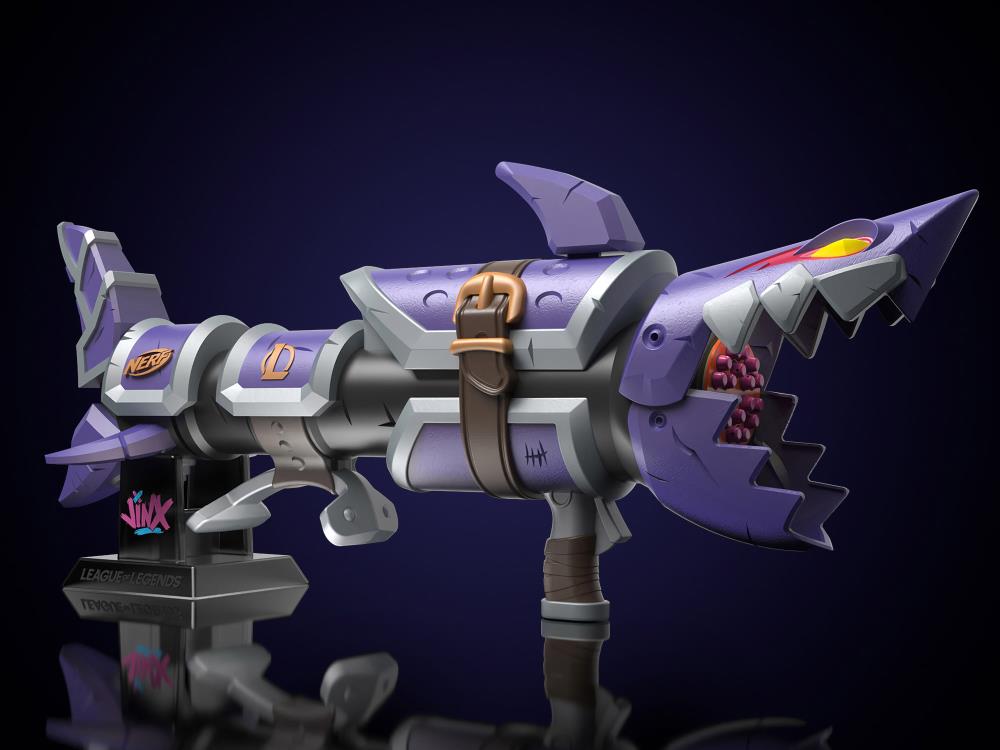 Jinx was already one of the most well-loved and recognizable characters on the League of Legends roster, but after the release of Netflix’s Arcane, her popularity has launched into the stratosphere. That kind of mainstream recognition usually means there are some awesome collabs on the way, which is definitely true in this case. This time around, Riot teamed up with Nerf to create a life-sized replica of Jinx’s classic blaster known as Fishbones, which was also featured in Arcane, as fans will remember.

Jinx’s Fishbones is available for pre-order now (pre-orders close January 1, 2023, and will be shipping on December 31, 2022. The gun is a gargantuan 35 inches long, and features jaws that open and close as you shoot. It holds 18 total darts, shooting out a three round burst every time you pull the trigger. Fishbones also comes with a Jinx-inspired stand and “display-worthy packaging” for those who want to show it off for everyone to see. The NERF LMTD League of Legends Jinx Fishbones blaster retails for $169.99, and is available for pre-order on Amazon or directly from Nerf.

The Jinx Fishbones collaboration is part of NERF LMTD, a ” premium, special edition, fan-focused line from the Nerf brand brings you some of the most iconic items from movies, video games, and entertainment with premium features and packaging.” Other franchises that have been honored with a Nerf collab include Star Wars, Halo, Star Trek, Aliens, and G.I. Joe, just to name a few.

This has seriously got to be one of the coolest gaming merchandise crossovers I think I’ve ever seen, and absolutely something I wish I had when I was a kid. I’ve only touched League of Legends once in my life (that’s a whole story for another day), but the second Nerf releases something from a game I play, I might just have to splurge and treat my inner child.