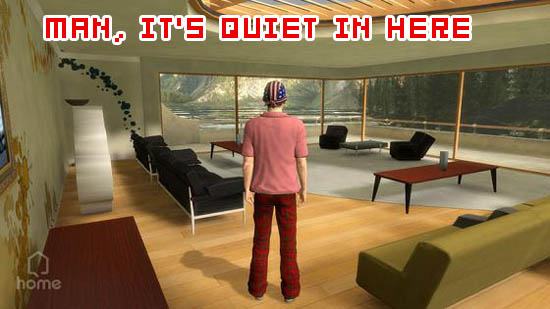 Thomas Bidaux, NCsoft’s director of product development, thinks that while Home is “very interesting,” it probably won’t cause PS3s to fly off the shelves.

“One of the limitations is linked to the PlayStation 3 – so the success of Home is 100 percent tied to the PS3’s penetration into the market,” Bidaux said. “I don’t think you can say you will sell more PS3s because of Home, but if the PS3 had the right penetration in the market, then yes – Home will be very interesting.”

It makes sense. Some PS3 owners can’t wait to get their hands on Home, but we haven’t seen much in the way of outside interest. Granted, that may change as Sony puts some advertising muscle into  Home in the coming months, but for now it’s just another neat feature for PS3 owners.

If you’ll recall NCSoft just partnered up with Sony (announced at E3) to bring some new MMOs to their consoles? While they aren’t as excited about Home, NCsoft likes that Sony has a history of keeping their consoles in living rooms for a good period of time.

“You don’t want to roll out an MMO and make it obsolete because of a new platform a year after that,” says Bidaux. “You want to have your MMO for many, many, many years – as many as possible.”

“So the PlayStation 3 is a good platform for us, and we assume it’s going to be around for quite a long time. Early adopters, and the early days – we don’t really worry too much at that point.”