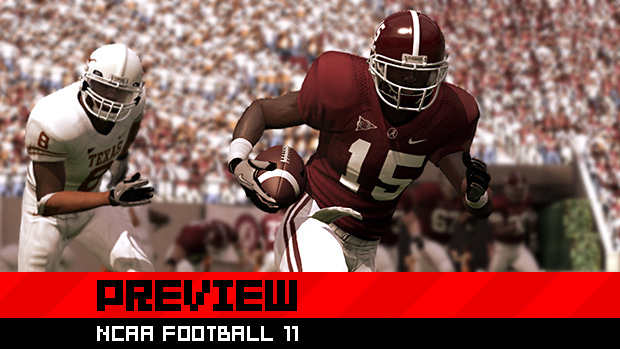 EA Sports’ NCAA Football franchise has tended to lag behind its elder brother, Madden NFL, in terms of the implementation of new features and improvements. That is, you usually see the new stuff hit Madden first, and come to NCAA Football the following year (or sometimes later).

This year, EA Tiburon — the developer of both titles — seems to be making a concerted effort to equalize the franchises in that sense. But Madden and NCAAF are still distinct games, as they should be. I got my hands on both of them at a press event in New York City on Wednesday; you’ll have to wait until Monday for my impressions of Madden NFL 11, but you can hit the jump for my thoughts on NCAA Football 11. 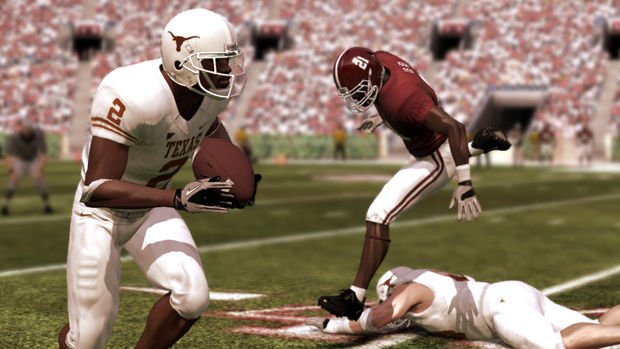 As far as I could tell in about thirty to forty minutes spent watching and playing NCAA Football 11, the game looks and plays nothing like its predecessors. Immediately noticeable is the stark difference in the visuals: it’s not that the graphics have been “tightened up” a whole bunch, but that the new lighting system goes a long way toward creating a more authentic look that’s still somewhat stylized — you might call it “hyper-realistic.” To be sure, player models do look better this year, which is mostly thanks to much better-looking (that is, less plastic-looking) skin. But the focus in NCAAF 11 is on the presentation.

NCAAF 11 steps onto the field with a fully realized ESPN presentation. Tiburon went to the sports giant and obtained their latest broadcast graphics, so what you will see in the game will be the same as what you’ll see on TV during Saturdays this fall. It’s not just about in-game statistical overlays, though; NCAAF 11 even includes 3D animated screen transitions. The final piece of the puzzle is the “Monolith,” the pre-game matchup graphic with the College Football shield logo — a setup that’s replete with ESPN’s college football theme music. 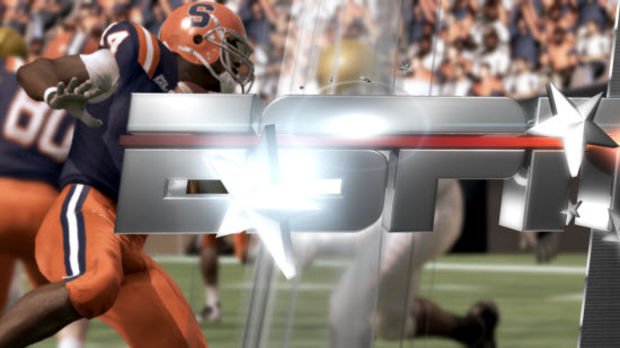 The game also looks better because Tiburon has made significant changes to its gameplay — changes that manifest themselves in the visuals. Thankfully, the Pro-Tak animation system that was the foundation of Madden NFL 10 is present in this game, so you’ll reap the full benefits — procedurally generated gang tackles and collision animations, lineman movement, and more. Tiburon also reduced the default game speed like they did in Madden 10, a change that leads to a marked difference in the on-the-field action. But the most important improvement this year is a revamped locomotion system, along with dual-stick controls for ball carrier movement — two major enhancements that are coming to Madden 11 as well as NCAAF 11.

Longtime football videogame players are accustomed to picking stars who have the rare and coveted 99 speed rating, because in years past, they could simply blow by everyone else. But acceleration plays a much larger role this year: if you have a receiver who isn’t all that fleet of foot, he can still be useful if his acceleration attribute is high, since he’ll be able to reach his top speed quickly and avoid tackles. And momentum matters now — players will lean realistically, and they won’t be able to turn on a dime (their turning radius is determined by their agility rating).

This ties in with the game’s new dual-stick controls. As ever, the left stick moves your player, but in NCAAF 11, the right analog stick offers much more delicate control over how he moves. You won’t be hitting the B button for a spin move anymore. If you push up, your player leans forward; a quarter-circle motion (up, then right or left) will have him lean in a particular direction so he can shy away from the brunt of a would-be big hit. Left or right will juke, but you can alternate between the directions to “bounce” from left foot to right foot in an effort to fake defenders out. Pulling back on the stick performs a hesitation move, and quarter-circles (down, then left or right) will do spins in those respective directions. 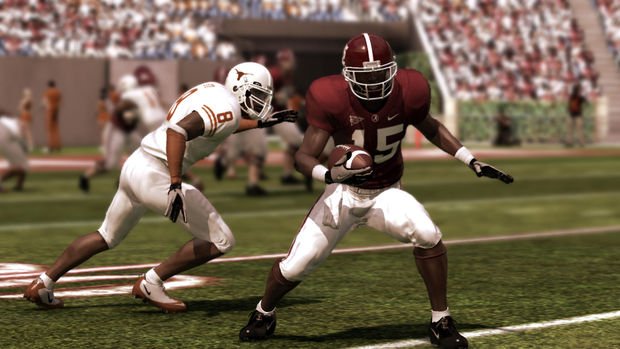 The system is simply more intuitive than it ever has been before, and the motions make sense in the context of what the ball carrier is doing. What he’s doing on a particular play depends on the offense that his team is running, and that’s where NCAAF 11’s emphasis on differentiating schools comes in. College football is a very different game from the NFL — the sport is much more wide open at the college level because of the wide variety in offensive styles. Each team is unique, and Tiburon aims to represent that in NCAAF 11. So whether you’re running the spread (like coverboy Tim Tebow’s Florida Gators), or the triple option, or something else entirely, your team’s playbook and play style will reflect it.

I played a half of football and didn’t get an immediate sense of that, but then, it’s something that can’t easily be conveyed in a short amount of time. But the feel of the game — the way in which the players move around the field — is vastly improved, and that was apparent from the moment I picked up the controller. It’s great to see that Madden and NCAAF are heading toward feature parity, especially when the functions in question are as vital as locomotion. NCAAF even has a leg up on Madden this year, with things like the ESPN presentation and an awesome new onside kick meter and camera angle.

Because its gameplay is getting closer to Madden’s quickly improving offering, NCAA Football 11 is shaping up to be one of the most impressive entries in the college football franchise. It will be out a month ahead of Madden, so gamers will be able to get a feel for the enhanced gameplay systems before the pro football experience launches in mid-August. Who’s excited for it?