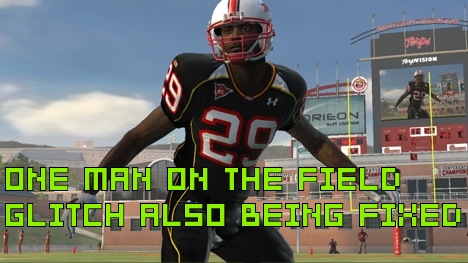 EA is aware that NCAA Football 2009 has some unfortunate and glaring issues. The first patch to the game is expected around next week. It is set to resolve both the nasty roster glitch and reordering depth chart issue. According to Pasta Padre, another patch for the game has already been sent to the authorities at both Sony and Microsoft.

This second patch will fix a pretty big list of stuff that I never even encountered while I played the game. Some of the things mentioned are a fix for recruiting exploits, improved coverage on kicks, and “Slider” correction. The second patch is expected to get through the verification process by early September. This should be just in time for the third patch, which will address the “accessibility to people that don’t normally play sports games” and NCAA football exclusivity issues.

Hit the break for the full list on the second patch, and hope that the first one actually fixes the roster business.