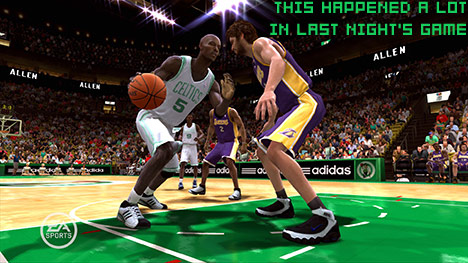 I don’t know how many of you watched last night’s NBA Finals Game 6, but if you did, you caught one hell of a blowout — it wasn’t ever really close. The Celtics absolutely obliterated the Lakers in a 131-92 win, with the 39-point margin of victory being the largest ever in a Finals-clinching game. It was one hell of a performance from the NBA’s best regular-season team, whose tenacious ‘D’ stonewalled Kobe and the Lakers all game long.

So for those of you keeping track at home, that’s now two EA Sports games that have wrongly predicted championship outcomes; Madden NFL 08 figured that the Patriots would become the first 19-0 team in NFL history, while NBA Live 09 picked the Lakers to take the Finals in seven games. Hopefully, the game plays better than it predicts — on that front, the developers of NBA Live 09 have been answering user questions on EA’s official forums.

If you don’t feel like wading through the entire 18-page thread, check out Pasta Padre for some of the salient points, which include “thousands” of new animations and a revamped, “MUCH better” dunk system. Unfortunately, they’ve scrapped the Superstar mode, but there’s a “ground-breaking feature” that EA will be announcing at E3, so stay tuned.