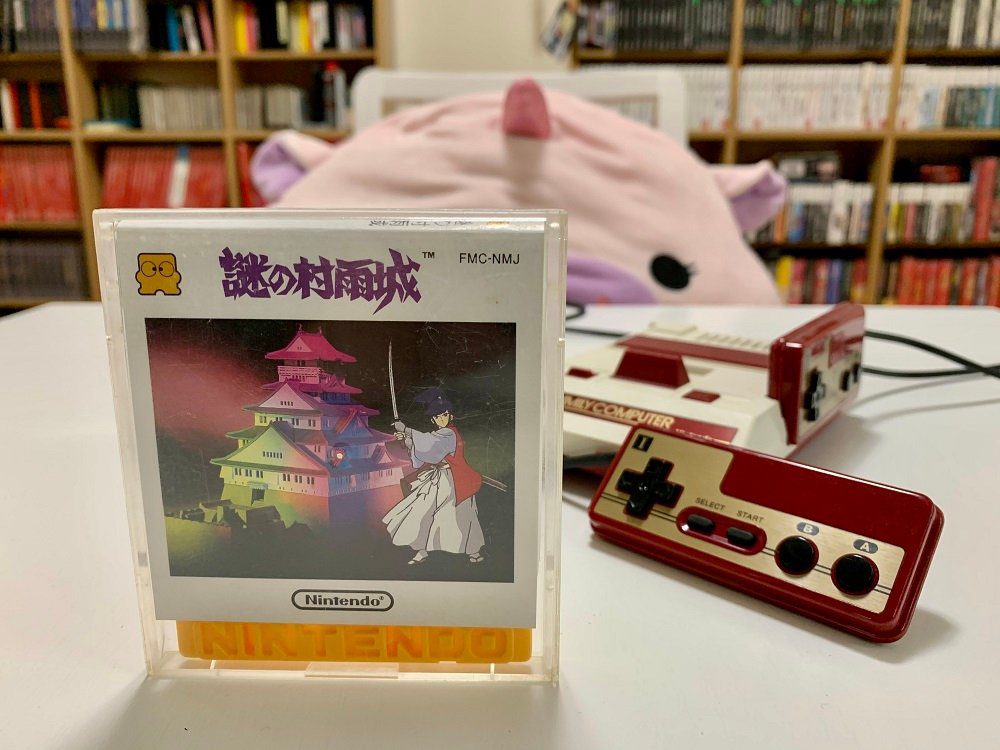 Nineteen eighty-six was a transformative year for Nintendo. Super Mario Bros. had released at the end of the previous year and ushered in a slew of influential games. The Legend of Zelda, Metroid, Kid Icarus (I guess), many of which were riding on the features of the Famicom Disk System, which also released that year. Home console games would quickly shift away from the cyclical arcade model and more toward adventures with endpoints; final goals to work towards, rather than just a high score.

We received many of the fruits of this labor. The Legend of Zelda would ship with a special battery backed cartridge to allow saving on the NES, while Metroid and Kid Icarus would swap to passwords. One notable game, however, was left in the dust among those titles; the second original title on the Famicom Disk System, Nazo no Murasame-Jou. Whether it was because it was too Japanese for Western audiences or… actually, that’s the only reason I can think of because it’s an excellent game that could have totally gotten away with just using a password system.

It’s hard to describe Nazo no Murasame-Jou without simply slapping on the label “action game.” What it isn’t is The Legend of Zelda, despite what its release period, top-down perspective, flip-screens, and save screen might imply. You throw shurikens as your primary form of attack, but if you get close to an enemy, you can smack them with your katana, so it’s hard to call it a shooter or a hack-and-slash. You’re also positively swarmed by enemies at all times, so, yeah, it’s an action game.

The plot involves an alien invasion in feudal Japan. You play as Takamaru, an apprentice Samurai, who has to infiltrate five castles; four of them to eliminate evil Daimyo, and the last to remove the alien threat. Along the way, you battle hordes of ninjas and creatures out of folklore, save some giant princesses, and fight these weird samurai who look like they’re throwing snakes at every stairway.

It bears repeating that you are constantly under assault by enemies in this game. Most stages are split into two parts: the journey to the castle and the attack on the interior. All throughout, you rarely get a moment’s peace. Ninjas pop out of everywhere, big dudes block doors, and statues spit projectiles. If you’re not moving, it’s probably because you just died.

Levels are non-linear and filled with dead-ends and alternate routes. Helpful signs guide the way, but take it from me: if a big guy is blocking the way, that’s where you go. Otherwise, it’s just a matter of constantly moving and trying to progress. There’s no greater relief than finding the end of a level and knowing your progress has been solidified.

You have three lives to make it to the end of each section, with each allowing you three hits before you drop dead. Every bar of health is precious. You can gain extra lives and refill your health by rescuing princesses and finding hidden bento boxes, but let me warn you: the princesses are sometimes randomly masks that haunt you throughout the castle, and I don’t think there’s any way to tell before you touch one. So that kind of sucks.

Don’t make the same mistake I did. I assumed that one princess in each castle was real and the others were randomly masks. This is not the case! Any princess can be real, and any can be masks, and it’s completely random. Sometimes you can collect three lives in a castle, other times, you can just eat shit.

It’s an old game, but Castlevania was released the same year, and it’s the best game on the NES and I won’t hear any arguments. Like Castlevania, it’s also very difficult, so the save system is appreciated, if only because you can walk away from it after you get killed by one of those naginata jerks for the millionth time.

You kind of have to memorize the later levels to get through them. Not just to find the quickest route but also to find all the power-ups and princesses. In particular, figure out where the bow power-ups are as they increase your throwing speed. You’ll also want to find the geta sandals which increase your walking speed. Then just hope the princesses aren’t masks. Don’t go charging at them since you’ll take damage if you’re in the same neighborhood when they transform.

Even then, it hurts so good. Your luck can turn quickly for the worst and it gives you that merciless old-school despair. The kind that makes you throw your controller or hit your head against the coffee table. I used to punch pillows, now I just usually practice my cussing. Also, don’t throw a Famicom controller. They’re hardwired into the console and the wire isn’t very long.

As long as you’re up for a challenge, Nazo no Murasame-Jou is a fun time. Extremely so. Even while I was throwing colorful phrases at the screen, I had trouble putting it down. It definitely belongs alongside The Legend of Zelda and Metroid, even if history doesn’t remember it as well. There’d be no sequels for it, but Takamaru made a few cameos, such as an appearance and dedicated mode in the Wii version of Samurai Warriors 3 and some Mii costumes in recent Smash Bros. titles.

It would be a staple of Japanese re-releases. It first got a classic edition on the Game Boy Advance, then hit both the Wii and Wii U Virtual Console libraries.

Then something amazing happened.

Nintendo realized that with very little effort, North Americans could understand the game and released it as The Mysterious Murasame Castle in North America on the 3DS Virtual Console. It makes sense, because, for a game as steeped in Japanese culture as it was, it’s easy to understand without knowing the language. A few tweaks, and it’s ready for western audiences. Hopefully, Nintendo will have the wisdom to add it to their Nintendo Switch Online service sometime in the not-too-distant future, but you can still nab it on 3DS. For now.