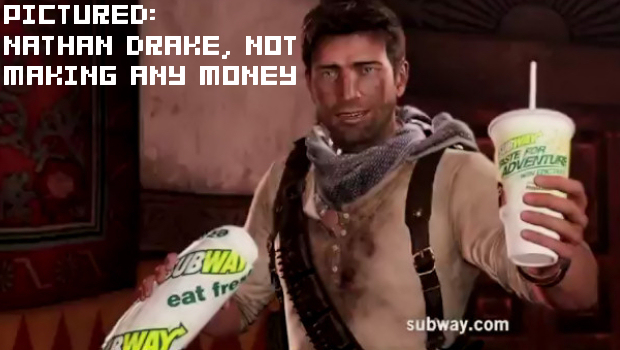 Naughty Dog has defended its use of Sony’s “PSN Pass” by claiming that, without it, Uncharted 3‘s multiplayer would need to be released as its own game. Wait … that doesn’t make any sense.

Director Justin Richmond said that either his game uses an online pass “or we offer online completely in its entirety also, so we have a complete offline package as well, so if you want to play the co-op with a friend, you can do that offline.”

Fortunately, Richmond had a more stereotypical answer as well — crying about server costs despite the fact that the server space was paid for with the original sale: “When that stuff goes online, it isn’t free. We have to pay for servers and all this different stuff to maintain it, and so at some point, you know, games have to make money. It is a business, and we just wanna be able to continue to provide that kind of content. If Sony ever comes to us and says “You’re not making enough money on this, you need to cut it” or whatever, that’s not something that we want. We want to be able to maintain the level of quality of the product that we’re giving out.”

Never mind the fact that the game is still going to sell a ton of $60 copies at launch and will inevitably have paid multiplayer DLC added, let’s just keep pretending that UNCHARTED F*CKING 3 wouldn’t make any money without an online pass! Seriously, I’d have infinitely more respect for a company that admitted it just wanted more cash. This little pity party developers keep throwing is among the slimiest things I’ve seen from the industry in a while.