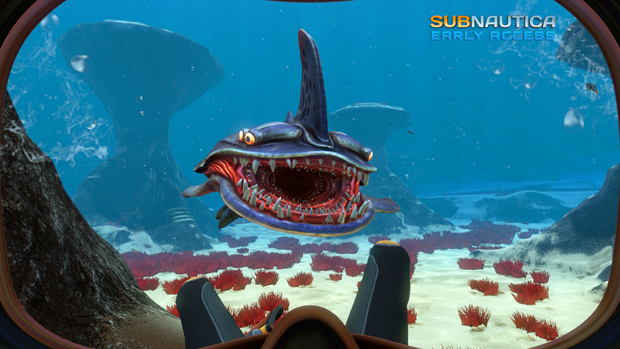 Note to self: rewatch The Abyss soon

Natural Selection 2 maker Unknown Worlds is doing its part with Subnautica, an open-ended exploration title that’s been in development for around a year. It’s now playable through Steam Early Access ($17.99; Windows only), though with the current build’s promise of “at least one hour of adventure content available for play,” it won’t be far enough along for most of us.

Still, I’ll be following development. Subnautica is set in an “alien ocean world” in which you can gather resources, build submarines, and fight creepy fish monsters. It’s a place I want to explore, eventually. Unknown Worlds expects the game to remain in Early Access for most of 2015.

“Over time the world will grow larger, deeper and more striking, creatures more diverse and intelligent, loot, crafting and vehicle construction more comprehensive, the story more fleshed out, and ecosystems richer and more vibrant. Large submarines, new unique life forms, and fantastic environments are all in production and will be introduced to Subnautica Early Access in updates.”

The gameplay-less Early Access launch trailer offers a glimpse at the setting:

More on the design here. “We’re not making a sandbox game, nor a building game, nor a survival game, although at times we thought we were,” says designer Charlie Cleveland. “We’re building a game where you feel like a scientist who has crash-landed on an aquatic alien world and is learning how it (and its strange inhabitants) work. It’s a game of exploration, discovery and theme.”