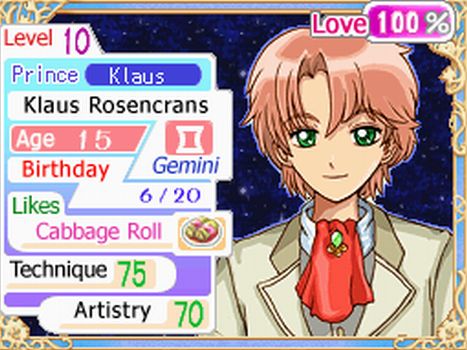 Dale North and I occasionally conversate on the topic of guilty pleasure games, a genre which we both indulge in on a semi-regular basis. Games like Earth Defense Force 2017 are almost universally acceptable as guilty pleasures, but I’m not talking about acceptable. What I’m talking about are titles like Nintendogs — they are clearly made for children, but you find yourself enjoying them anyway.

Princess Debut is sure to fall squarely in that category. An original IP from Natsumi, you play a girl who has stepped through a magical portal and finds herself in the role of a princess. The game challenges your dance/rhythm skills as you attempt to charm one of six princes in time for the ball.

I know, most of you have stopped reading already to vomit, but for those of you who are thinking it perfectly suits the kind of game you would play in secret, check out the screens. The art style is sure to appeal to people with occasionally debilitating anime habits, and let’s face it, it’s more or less a dating sim. If you liked Persona 3, you were already kind of playing one (although it certainly was less girly than this game seems to be).

The game will be released for Nintendo DS this fall. I hope Klaus will go on a virtual date with me … he’s kind of dreamy.

Burlingame, Calif., July 10, 2008 – Natsume, a worldwide developer and
publisher of family-oriented video games, announced today a new
original IP, Princess Debut, a rhythm and adventure game for girls.
The game is coming to the Nintendo DS system this fall. Published and
developed by Natsume, Princess Debut offers gamers the chance to step
through a portal into a magical world where they become a princess.
Girls will have to master their dance moves and woo one of the six
charming princes in time for the big ball!

“What young girl doesn’t dream of becoming a princess? Princess Debut
transports girls into that magical fairytale world while introducing
elements of dance and music,” said Hiro Maekawa, President and CEO at
Natsume. “Princess Debut is a fun rhythm and adventure game with some
of the most beautiful and fluid dancing ever seen in a DS title.”

In the game, players find themselves in a fantasy world where they have
30 days to get ready for the big ball; they’ll have to master their
dance moves and win over one of the six handsome princes to be their
partner. They’ll meet and woo the princes through the game’s large,
branching storyline and exciting event system. Once the player
convinces a prince to be their dancing partner, it’s time to go out on
the dance floor! Players will use the Touch Screen to guide their
character gracefully across the dance floor while matching their
partner’s rhythm. All of the dances in the game are taken from
motion-captured professional dancers, so the game is just as
impressive to watch as it is fun to play.

Princess Debut offers four modes of play including Story, Ballroom,
Practice, and Movie. With 20 outfits to find, 14 unique endings to
experience, and 18 different kinds of music and dance styles to choose
from (including Waltz, Latin dance, Tango, Ballroom, and much more),
there’s no shortage of things to see and do!

Princess Debut will be available exclusively for the Nintendo DS this
fall. For more information on Princess Debut, please visit
www.natsume.com.