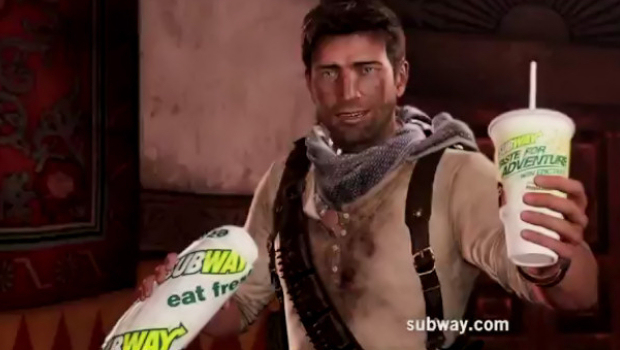 “Hey, I’m Nathan Drake. If you’re the adventurous type like me, then get in on the Subway taste for adventure,” says Nathan Drake in the above video.

The idea of videogames and marketing departments working together is nothing new. We’ve had Master Chief adorning Mountain Dew bottles and Slurpees made to resemble Kratos. However, the Uncharted 3 star has gone a step further by “acting” in a commercial of his very own. He details the “Taste For Adventure” promo we posted earlier, where you can buy sandwiches in exchange for game content.

It’s an interesting idea, but it’s also damn hilarious to watch Nathan acting like a corporate prostitute. Commercial products are often photoshopped into a game character’s hands as a joke. To see it done sincerely is highly amusing.

So yeah, be a winner like Nathan and eat fresh! He shoots fellow human beings in the face and cracks wise about it, so you need to be just like him.