Bandai Namco have announced that anime brawler Naruto to Boruto: Shinobi Striker will receive a Western release on August 31, just one day after its Japanese launch.

Unlike in Japan, where the game will only be available on PS4, North America and Europe will also be getting the game on Xbox One and PC. Europe will also receive a limited Uzumaki Edition, which includes a copy of the game, a season pass for nine upcoming DLC packs and a diorama of Naruto Hokage and Boruto, all housed in special packaging. 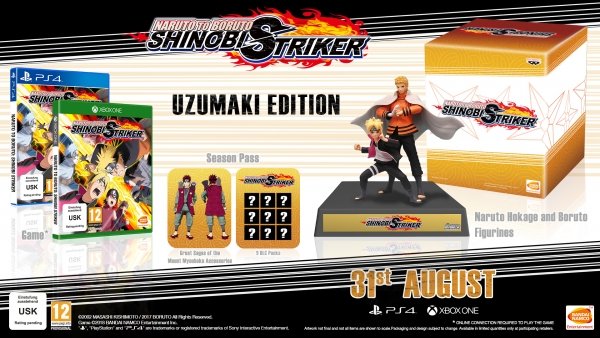 A lengthy new trailer has also been released by Bandai Namco. The video reveals two new characters – Gaara and Deidara – and takes a look at the game’s roster, locales and modes. These include the base-invading Flag Battle, the checkpoint-holding Base Battle and some good, old-fashioned ninja warfare in the down-and-dirty Combat Battle.

Naruto to Boruto: Shinobi Striker launches on PS4 in JapanAugust 30 and on PS4, Xbox One and PC worldwide on August 31.