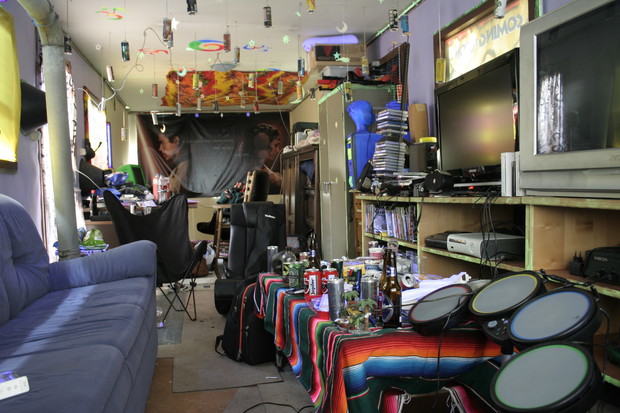 [Editor’s note: Dtoider mistic heads up the biggest No Apparent Reason Party group in Europe and holds an annual NARP to coincide with PAX each year. Here’s a recap from the latest DtoidEurope get together. — CTZ]

Well its about that time again. The EuroNARP ended more then a week ago, but it took some time to get everything sorted. I’ve got a sh*tload of pictures (most of which can’t really be shown on Dtoid, so we won’t but the ones that can be shown can be found in this post)

Let me use this post to also explain to you all how to get a great NARP going. The first thing, as with anything you want to organise is:

We’ve chosen our location to be “Teh Lair²”, a set of containers owned by my father, installed on an industrial site.

This has several advantages for us:
– Industrial site = No Sound limits
– No Neighbours
– No unwanted visitors since we’re hidden pretty well
– Quite a good powersupply
– Space enough to enable people to put their tents down and camp

Main Container as seen from the entrance

We divide our location into several specific areas to “improve” the gaming-capabilities of that area. If you put too much different stuff in the same spot, people won’t know what to choose from.

So now that you’ve got a great location set up, you need the most important thing about NARPs:
Games & Gamers

This sounds pretty straightforward, and it kinda is. Its just not always easy to get a lot of people to join your NARP, especially in Europe it seems.

We had about 15 people that stayed the full three days, which was fucking awesome. Seriously, if you ever come to one of our EuroNARPs, take a tip from the people who’ve tried it, come for all three days or you’ll feel like you’ve missed it all.

Make sure you go for multiplayer games, some great tips:

However, the chance for people to relive their childhood often negates the need for multiplayer-modes.

And ideally, its a little bit of both:

Or give them the chance to play with a peripheral that they haven’t used yet (or a ridiculously detailed one):
Strikeman trying out the X-Rocker while playing a GP2X-Wiz.

And Alex lets out the East-European-mafia-dude that’s hidden beneath his Romanian roots:

Another good idea for NARPs are side-activities!

We are kinda of proud of the number of things we do outside of gaming, but here are the best ones for the EuroNARP of this year:

What was never meant to be a side-activity became a rather popular one:

If you’ve got the possibility to do this, make sure you do it cause you’ll get some sweet results (as you can see below)

Kon as drawn by Fenux:

Sonic by me (coloured by viersee and smis!)

And last but certainly not least, prepare enough space so people can crash!

Look at the guy sleeping in the back:

And some people crash in a way that makes you fear the way they’ll feel when they get up in the morning:

So there you go!

These are the main ingredients that make the EuroNARP into the legend that it has become in just one year time.

Hopefully we’ll see you at our next one. Since we can’t wait for another year, we’ll be doing another one in march already!

Hhope to see you soon!