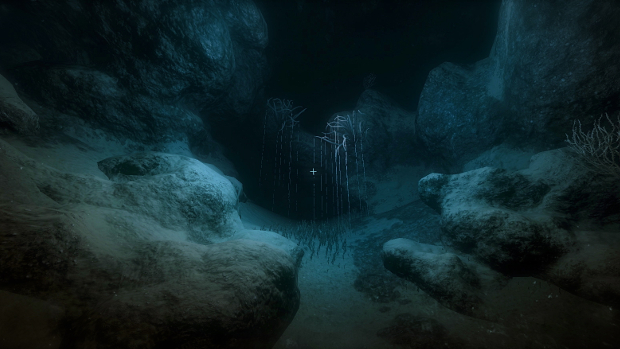 I said it when I checked out Amnesia developer’s SOMA early this year, but we could do with some more games set underwater. It’s a scary place. There are goblin sharks down there, damn it. And you don’t even have to go deep down to terrorize. Jaws spooked a generation.

The ocean is like space, but with more horrifying, alien, living organisms to kill you. Opposed to the flashy, bright monsters of SOMA, Narcosis is aiming for a (somewhat) more realistic terror.

You are an industrial diver working on the very bottom of the Pacific Ocean (the best ocean). Here there are shades of Dead Space, but without a gory and horrific surprise. An incident has left everyone else on the underwater rig tied up on account of them being killed, so you, on your lonesome, need to get topside.

Narcosis is mostly linear and narrative driven, but there’s, “no conspiracy,” writer David Chen explained. There is no dark mystery to unravel. More than the typical “survival horror” genre this is “survival,” with some psychological horror woven in, most directly through narration as you are treated the to inner monologue of a man in serious trouble.

The psychology is also played with by harking back to the title, Narcosis, which is an actual condition that effects deep divers, causing audio visual hallucinations. It can also be brought on if your oxygen supply dwindles, the gauge of which you can look down within your dive suit to see on a physical HUD. This effect is doubly impressive while playing entombed in an Oculus Rift and head phones, as I did on the Game Connection Europe show floor, as you look down inside your cockpit at your oxygen levels, or look through the pane of glass that stands between you living still and being smooshed by immeasurable pressure.

Chen calls it a “walking coffin.”

Deep sea life–often exaggerated in size or ferocity–also cause problems. The only source of light beyond a flashlight is your flare gun, which doubles as a means to cause distractions for fish n’ things what want to nibble at you. You also have a knife, but I only ever used it to prise a face-hugging nasty from my face. It clamping on out of nowhere scared the heck out of me, jump scare as it was.

What I played of Narcosis was a lot of deep sea walking, jetting over crevasses, and a bit of avoiding fish things. As you see in the trailer, there’ll be bits taking place back within the flooded station, and you’ll have some actual tasks to complete to get yourself topside. It’s aiming for a fall 2015 Steam release. We’ll see if the Oculus is out by then, because the two work real well together. Otherwise, I’m keen to explore the deep story Chen aims to deliver.